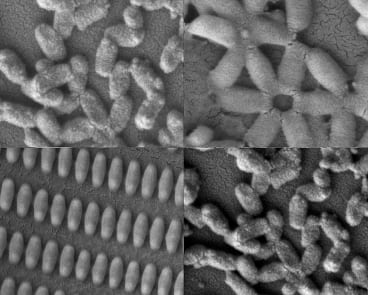 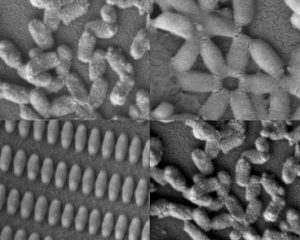 Researchers at MIT and the University of North Carolina created these coated nanoparticles in many shapes and sizes. Kevin E. Shopsowitz and Stephen W. Morton.

Using this new combination of the two existing technologies, scientists can produce very small, uniform particles with customized layers of material that can carry drugs or other molecules to interact with their environment, or even target specific types of cells.

“Everyone’s excited about nanomedicine’s potential, and there are some systems that are making it out to market, but people are also concerned about how reproducible each batch is. That’s especially critical for applications such as cancer therapies,” Hammond says. “Fortunately, we have combined two technologies that are at the forefront of addressing these issues and that show great promise for the future of nanomanufacturing.”

Hammond and Joseph DeSimone, the Chancellor’s Eminent Professor of Chemistry at UNC and the William R. Kenan Jr. Distinguished Professor of Chemical Engineering at North Carolina State University, are the senior authors of a paper describing the technology in the July 1 online edition of Advanced Materials. Lead author of the paper is Stephen Morton, a graduate student in Hammond’s lab.

Hammond’s lab previously developed a layer-by-layer deposition technique for coating nanoparticle surfaces with alternating layers of drugs, RNA, proteins or other molecules of interest. Those coatings can also be designed to protect nanoparticles from being destroyed by the body’s immune system before reaching their intended targets.

However, the layer-by-layer application processes commonly used today to coat nanoparticles take too long to be useful for rapid, large-scale manufacture: For each layer, the particles must be soaked in a solution of the coating material, then spun in a centrifuge to remove excess coating. Applying each layer takes about an hour.

In the new study, the MIT researchers used a spray-based technique, which allows them to apply each layer in just a few seconds. This technology was previously developed in the Hammond lab and is now being commercialized by Svaya Nanotechnologies.

Hammond combined this approach with a nanoparticle-manufacturing technology known as the PRINT (Particle Replication In Non-wetting Templates) platform, which was developed in the DeSimone lab at UNC and is now being commercialized by Liquidia Technologies. Liquidia focuses on using the PRINT platform to create novel nanotechnology-based health-care products, vaccines and therapeutics.

The PRINT platform is a continuous roll-to-roll particle-molding technology that enables the design and mass production of precisely engineered particles of controlled size, shape and chemical composition. To make particles like the ones used in this study, a mixture of polymers and drug molecules (or other payload) is applied to a large roll of film that consists of a nano-sized mold containing features of the desired shape and size. The mixture fills every feature of the mold and solidifies to create billions of nanoparticles. Particles are removed from the mold using another roll of adhesive film, which can then be sprayed with layers of specialized coatings using Hammond’s novel technology and separated into individual particles.

“The idea was to put these two industrial-scale processes together and create a sophisticated, beautifully coated nanoparticle, in the same way that bakeries glaze your favorite donut on the conveyor belt,” Hammond says.

“The combination of PRINT and spray layer-by-layer provides a versatile platform for rapidly modifying the surface chemistry of particles,” says Frank Caruso, a professor of chemical and biomolecular engineering at the University of Melbourne who was not part of the research team. “This approach also holds promise for high throughput in the development of particle-delivery systems for nanomedicine applications.”

This new process promises to yield large quantities of coated nanoparticles while dramatically reducing production time. It also allows for custom design of a wide variety of materials, both in the nanoparticle core and in the coating, for applications including electronics, drug delivery, vaccines, wound healing or imaging, Morton says.

“Both the PRINT and layer-by-layer technologies allow for incorporation of many different materials that have unique properties to make systems with multiple built-in functions,” he says.

In follow-up studies, the researchers plan to design particles containing cancer drugs and cancer-fighting coatings to see if they can effectively shrink tumors. Some of those particles may include combinations, such as two different chemotherapy drugs, or a drug combined with RNA molecules that target cancerous genes. These combinations can work together in a synergistic fashion to selectively disarm and kill cancer cells.