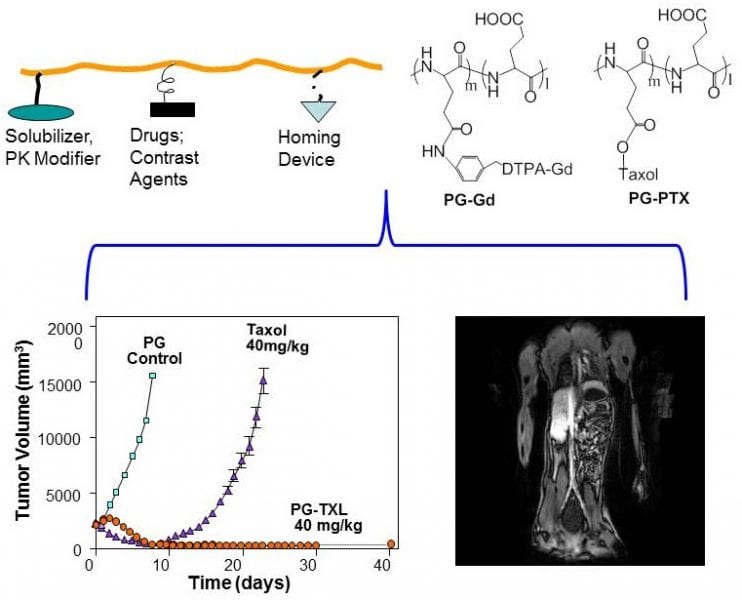 Chemotherapy or not? This question has been on the minds of many cancer patients. This question arises from two adverse effects caused by chemotherapy: 1. Drug toxicity and 2. Less than desired drug concentration in the tumor. The first problem is associated with the drugs being used. These drugs cause collateral damage to the surrounding healthy organs, thus greatly reducing the patients’ quality of life. The second problem occurs, simply put, because the concentration of drugs reaching the tumor is less than the desirable concentration of drugs in the tumor. So why can’t the intended concentration of drugs reach the tumor? Many drugs, in fact, are quickly cleared from the body after their injection and have no chances of reaching the tumors. Studies indicate that, in most cases, less than ten percent of the drug is delivered into the tumor. The other ninety percent of the drug is filtered out by the healthy organs, such as the liver and kidney. However, the drugs are often toxic to normal organs and cause sometimes irreversible damage. 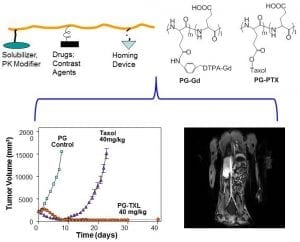 Poly(L-glutamic acid)-Taxol, abbreviated as PG-TXL, is an early nano-drug that scientists developed to overcome these two problems associated with a chemotherapy drug called paclitaxel (also called Taxol), an anti-cancer drug derived from the bark of the Pacific yew tree. When paclitaxel was first introduced into the clinic, it was delivered to the patients by dissolving it in a mixture of Cremophor oil and ethanol before slowly infusing it into the patient. This method was hindered by the acute hypersensitivity experienced by many patients to Cremophor oil. On the other hand, poly(L-glutamic acid), or PG, is made up of a long chain of molecules called L-glutamic acid, which is a naturally occurring amino acid and is highly soluble in water. In this case, PG could be used to carry paclitaxel through the blood stream, eliminating the use of Cremophor and alcohol. PG-TXL can also stay in blood circulation for a prolonged period of time. This increases the concentration of drugs delivered to the tumor because tumor blood vessels are more permeable than normal blood vessels. Enzymes inside the tumor break down the larger PG-TXL molecules to release paclitaxel, the active anti-cancer ingredient. Upon release of paclitaxel, the tumor cells are killed to a high degree of efficiency. As a result, PG-TXL achieved remarkable success in animal studies and was soon tested on human patients.

The clinical trials for PG-TXL, however, encountered several setbacks and eventually halted in late 2016 at Phase III, only one step away from FDA approval. A recent review article in WIREs Nanomedicine and Nanobiotechnology by Zhao, et al., “A hindsight reflection on the clinical studies of poly(l-glutamic acid)-paclitaxel,” provides a summary of the clinical trials on PG-TXL as well as discussed lessons learned from the drug development endeavor. Zhao et al. argued that if appropriate patient populations were selected, it may have better outcome in the clinical trial studies involving PG-TXL. For example, many of the patients that were recruited for PG-TXL studies had gone through several rounds of treatment with paclitaxel or similar chemotherapeutics. This may have led to increased resistance to paclitaxel. Therefore, it is not surprising that PG-TXL would not have performed in the clinical studies as well as it did during preclinical studies. Furthermore, enzymes, such as cathepsins, that break down PG-TXL to release the active ingredient, demonstrated varied levels of activity among different patients. Patients with high cathepsin activity in their tumors that used PG-TXL were expected to show the greatest effect against tumors. It is noteworthy that the clinical trials of PG-TXL were conducted before the arrival of precision medicine, or the tailoring of treatment to the individual characteristics of each patient. Indeed, the patients involved with the PG-TXL studies were not selected based on the cathepsin activity in their tumor, nor features of tumor vasculature. The authors conclude that future nanomedicine would have a better chance of success if nano-drugs can deliver multiple therapeutic drugs through tumor-specific processes, ideally under image guidance. Collaborations between physicians, research scientists, pharmaceutical companies, and academic institutions are needed during clinical trials for innovative drugs to increase the odds of success.

Kind contributed by the Authors.