Chameleon metals change their surface structure in response to heat

Researchers develop chameleon metals that change their properties when heated to different temperatures. 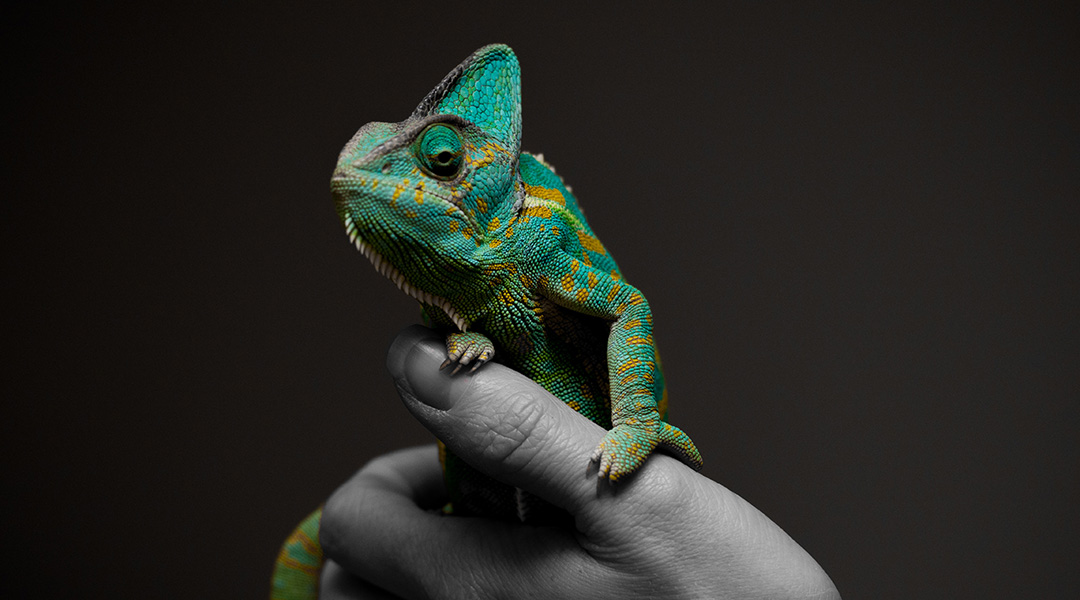 Chameleons change the color for camouflage and communication with conspecifics. For example, striking colors show the readiness for courtship. The coloring also depends on external factors such as temperature, sunlight, time of day or humidity. Just like a chameleon changes the skin color in response to its environment, now engineers at the Iowa State University have found a way for metal to change its surface structure in response to heat. The results were recently published in Angewandte Chemie.

Martin Thuo, professor of materials science and engineering, and his team — Andrew Martin and Winnie Kiarie, Iowa State doctoral students and Boyce Chang, a postdoctoral fellow at the University of California — started with a liquid metal alloy of gallium, indium and tin synthesized into particles covered with a smooth ~1 nm thick oxide shell.

As the particles are heated, the surface thickens and stiffens and begins to behave more like a solid. “The challenge was developing the right conditions to control the rate of composition inversion,” said Thuo. “Simultaneously controlling rates of physical and chemical transformation.”

He continued: “Since increasing temperature leads to the oxide becoming thicker, we lose elasticity of that layer and any expansion starts to initiate fracture. We have to be very careful with the rate at which we increase the temperate to avoid explosion or rapid release of the material.” Once they figured out the trigger points they could run the process much faster.

The technology could lead to a new group of smart alloy systems that evolve the surface patterns and their composition with temperature or analogous stimuli for applications ranging from sensing to catalysis, according to Thuo estimates.

The particles respond to different levels of heat, bringing different elements to the surface. At certain temperatures, the particle’s outersphere surface breaks and the liquid metal inside comes to the surface. The most reactive, gallium, breaks through first. More heat brings indium to the surface. And the highest heat (about 870°C) brings out florets of tin. Here, the researchers have to carefully control time, temperature, and oxygen levels. That allows them to predict and program the exact surface texture of the particles.

The technology could be used to fine-tune a metal’s performance for different applications. “This kind of behavior can also be used to protect metals from damage where releasing a component that can decompose, inhibit or scatter a component that could, for example, corrode the underlying metal offers protection,” said Thuo. “This behavior can also be used to alter tribology of the metal or even optical properties e.g., if one exposes a component like copper to the surface, one can envision that turning from black to either white or blue in its hydrated or dehydrated states upon oxidation.”

The researchers expect the technology to work with other metal alloys. “My student Andrew Martin and I are also exploring the fundamental rules, and the generality of this phenomena across a range of metals. We are also exploring how to exploit fractals and entropy to engineer surface generated patterns and amount of the material deposited.”