Carbon nanotubes could be the "bits" of quantum computers

Munich-based team show how nanotubes can store information in the form of vibrations. 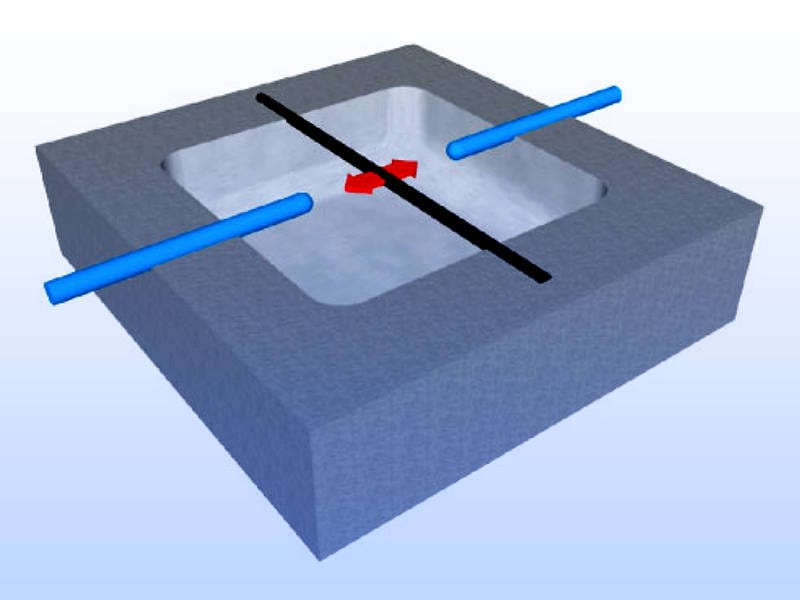 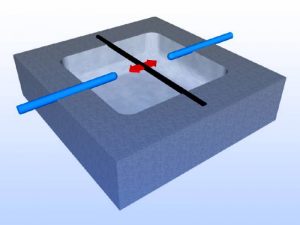 Like a guitar string nanotubes (black) can be clamped and excited to vibrate. An electric field (electrodes: blue) ensures that two of the many possible states can be selectively addressed. Image: M.J. Hartmann, TUM.

Carbon nanotubes can be used as quantum bits for quantum computers. A study by physicists at the Technische Universitaet Muenchen (TUM) has shown how nanotubes can store information in the form of vibrations. Up to now, researchers have experimented primarily with electrically charged particles. Because nanomechanical devices are not charged, they are much less sensitive to electrical interference.

Using quantum mechanical phenomena, computers could be much more powerful than their classical digital predecessors. Scientists all over the world are working to explore the basis for quantum computing. To date most systems are based on electrically charged particles that are held in an “electromagnetic trap.” A disadvantage of these systems is that they are very sensitive to electromagnetic interference and therefore need extensive shielding. Physicists at the Technische Universitaet Muenchen have now found a way for information to be stored and quantum mechanically processed in mechanical vibrations.

A carbon nanotube that is clamped at both ends can be excited to oscillate. Like a guitar string, it vibrates for an amazingly long time. “One would expect that such a system would be strongly damped, and that the vibration would subside quickly,” says Simon Rips, first author of the publication. “In fact, the string vibrates more than a million times. The information is thus retained up to one second. That is long enough to work with.”

Since such a string oscillates among many physically equivalent states, the physicists resorted to a trick: an electric field in the vicinity of the nanotube ensures that two of these states can be selectively addressed. The information can then be written and read optoelectronically. “Our concept is based on available technology,” says Michael Hartmann, head of the Emmy Noether research group Quantum Optics and Quantum Dynamics at the TU Muenchen. “It could take us a step closer to the realization of a quantum computer.”