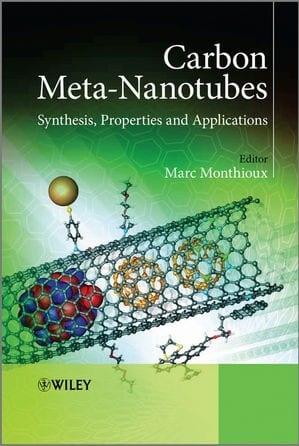 Carbon nanotubes – long, thin carbon ‘wires’ just a nanometer or so across, but up to many thousands of times longer – possess exciting mechanical, optical and electrical properties that would seem to make them ideal nanoscale materials.  You will hardly find a more comprehensive reference on the science of carbon meta nanotubes.  More precisely, 6 individual chapters cover the most recent technological advances and research developments on an exceptionally timely topic.

The 1st chapter by Monthioux constitutes an overview to the field including a classification of the different carbon nanotubes.  In addition, the author discusses some properties of carbon nanotubes.

Doped carbon nanotubes are the subject of the 2nd chapter by Penicaud, Peptit, and Fischer.  They summarize results demonstrating that carbon nanotubes may be doped – substitutional doping, endohedral doping, and external doping – which leads to an overall increase of conductivity.  The authors focus exclusively on single wall carbon nanotubes and describe the various chemical means to realize n-doping, on one hand, and p-doping, on the other hand.  They conclude with spectroscopic means to corroborate the doping and a brief outline regarding practical applications of doped nanotubes.

A concise overall overview of the synthesis, properties, and application of decorated nanotubes are illustrated by Basca and Serp in the 4th chapter by specific examples.  The authors highlight different methods for carbon nanotube coating ranging from deposition from solution and self assembly methods to electro- / electrophoretic deposition and deposition from the gas phase.  Besides a complementary description of spectroscopic methods to corroborate the carbon nanotube decoration an extensive insight into application is provided.  In terms of the latter, import aspects in the area of sensors, catalysis, fuel cells, and hydrogen storage are elucidated.

Filling carbon nanotubes with molecular building blocks and with fullerenes are discussed by Sloan and Monthioux as well as by Simon and Monthioux in the 5th chapter.  Particular emphasis is placed on filling carbon nanotubes, namely filling parameters, routes, and mechanisms.  In particular, opening of the carbon nanotubes are discussed followed by gas phase as well as liquid phase filling processes.  The latter are concluded by a brief description of the different materials that have been employed for filling – including fullerenes to result in peapods – and the impact that filling exerts on behavior, property, and applications.

Golberg and Terrones cover recent advances in the synthesis and structures of heterogeneous nanotubes.  To this end, the 6th chapter presents carbon nanotubes, in which carbon atoms in a honeycomb graphene lattice are fully or partially substituted with heteroatoms – typically nitrogen and / or boron.  As a matter of fact, such substitution results in a significant modification of the tube electronic properties and atomic structure in for example, boron nitride nanotubes and boron substituted or nitrogen substituted carbon nanotubes.  In particular, different production and synthesis routes are compared complemented by a description or properties and a potential basis for application.

As such, I expect that “Carbon Meta-Nanotubes – Synthesis, Properties and Applications” will generate an immediate impact in the interdisciplinary field of physics, chemistry, and engineering of carbon and carbon meta-nanotubes.  Detailed treatment covers the scientific basis ranging from the fundamentals in the synthesis and properties of carbon nanotubes and analogous to practical applications.

Overall, the chapters should prove very useful to both students and researchers in the different areas.   All chapters are solid, comprehensive discussions of physical properties of this carbon form.  Personally, I would recommend this book to chemical physicists / physical chemists and to those broadly interested in nanoscience.