Can we Become Better Parents by Studying Animals? 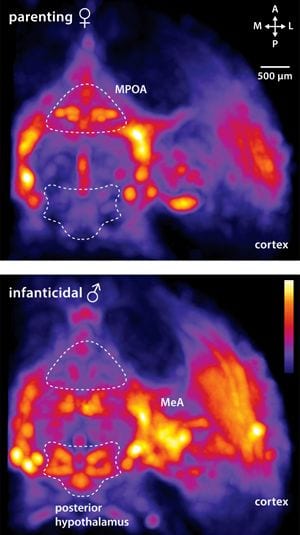 A mother is admitted to a psychiatric ward shortly after giving birth: post-partum depression. What makes this worse is that her husband is among the 5 – 10% of men who suffer similar affective problems after the birth of a child (a little-known figure, by the way). This is not a good conditioning environment for the newborn, who is particularly susceptible to such influences in the first few months. Deficiencies in parental responsiveness that are being studied in animals that are neurobiologically relatively similar to humans are now being revealed at the level of neuronal projections (the route that a neuron takes from one centre of the brain to another).

In the context of these studies, rodents are sufficiently similar to humans, and are easy to manage, hence opening up the prospect of pharmacologically targeting the very same projections in humans. Evidence from mice, also paralleled by related findings in humans, suggests that there is a core parenting circuit, albeit responding in different ways to different stimuli. Such circuits determine – upon appropriate stimulus – whether a male rodent behaves aggressively or parentally towards a pup: possibly another insight that could be translated into human parenting. Brain activity imaging in female mice shows the MPOA (medial preoptic area) of the brain to be active, but the posterior hypothalamus inactive, during typical parenting behaviour. In infanticidal males, on the other hand, the MPOA is inactive, but the posterior hypothalamus is active: i.e. the opposite pattern.

The MPOA seems to be a common parenting-related structure between the sexes, and between mice and humans, and projections from this part of the brain might well represent therapeutic targets for ameliorating behavioural problems associated with parenting in humans, as concluded by Kohl et al. in their recent article in BioEssays.

Also watch the video abstract prepared by the authors below: