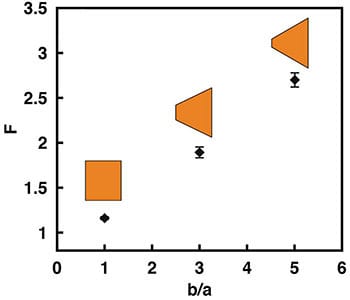 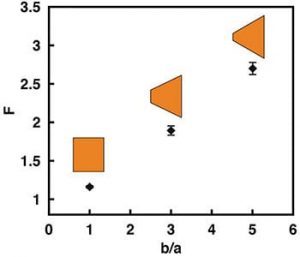 Rectification factor F for GO films with different cross-sectional areas at the entrance and exit ends.

It was recently discovered that two-dimensional graphene oxide (GO) lattices are capable of rectifying ion currents. Interstitial spaces in these geometrically symmetric lattices act as nanochannels. The robust nature and straightforward synthesis of GO films highlight their potential in applications as a lower-cost, large-scale alternative to conventional nanofluidic rectifiers. Interestingly, ion transport through these symmetric structures has been found to be a naturally asymmetric process. Australian researchers have now introduced a lengthwise geometrical asymmetry into GO films to further improve the ion current rectification. For the first time, the researchers have also generated electrical power using such a graphene-based nanofluidic system.

In electronic circuits, a semiconductor diode serves to suppress current flow in one direction. Similarly, ionic transport in nanofluidic circuitry can be controlled using nanofluidic diodes. These devices typically incorporate nanopores or nanochannels, which boost ion transport in one direction while limiting it in the other. This ion current rectification is usually achieved by introducing an asymmetry by modifying the device geometry, the surface charge distribution, or the electrolyte properties at either end of the diode.

Current rectification in the GO films occurs via counter-ion trapping and release, which interferes with their inherent geometric fore-aft symmetry. By cutting the films into trapezoidal shapes, the symmetry breaking is further manipulated. The asymmetry is determined by the cross-sectional area ratio b/a. By investigating the rectification factor F (the ratio of currents applied to the working electrode at the same voltage, but with different polarities) and I-V characteristics for different shapes, optimal rectification conditions could be determined. For both geometrically symmetric and asymmetric GO films, the authors investigate the influence of changing the solution pH, which modifies the surface charge distribution. A salinity gradient is also introduced in the electrolyte concentration between anodic and cathodic reservoirs, resulting in current generation at zero applied potential.

This systematic approach to enhancing ion current rectification in GO films has opened routes towards low-cost, scalable solutions for use in applications such as biosensors, as well new possibilities for osmotic power generation and energy storage.