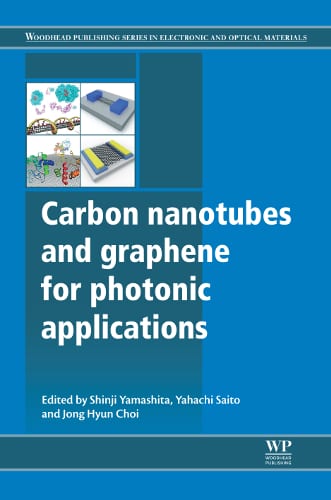 With the increasing interest in carbon nanostructures for both their scientific interest and potential for practical applications, textbooks and review articles continue to appear with a special focus on new findings and their relation to prior knowledge. The recent volume entitled Carbon Nanotubes and Graphene for Photonic Applications, edited by Shinji Yamashita, Yahachi Saito, and Jong Hun Choi and published by Woodhead Publishing in 2013, fits nicely into this context.

The book itself is divided into three parts. The first part, consisting of a little less than 30% of the book, has three chapters on the optical properties and fabrication of carbon nanotubes and graphene, and can be read as an entry point to the field. The second part, which constitutes a little more than 35% of the book, is devoted to carbon nanotubes and graphene for laser applications. This part is more specialized and would be of more interest to readers seeking information regarding specific laser-related applications. The final third of the book is also a bit more than a third of the book and focuses on carbon-based optoelectronics and is more device-oriented.

The individual chapters provide excellent coverage of the literature with each chapter containing many pertinent and current references. The authors of the 13 chapters are international, with seven coming from Asian institutions (Japan 3, South Korea 2, China 1, Singapore 1), three from European institutions (France 1, Germany 1, UK 1) and three from the US. The book has no overview or introduction laying out the goals of the book, the background expected for the reader, or about what a reader should especially look for in reading one article or another, nor is there an ending with either a take-home message or a perspective on where the field is now going. Some perspectives from the editors, who are well-known contributors to the field, would have been welcome.

Let me now return to my personal reaction to the book. I found the three introductory chapters to provide a very useful introduction to the field of nanotubes, graphene, and optics. The second chapter by Einarsson and Maruyama, however, covers both single-wall nanotubes and graphene and even has comparisons to graphite. This chapter is nicely focused on synthesis methods with a perspective to device utilization and would have made a better first chapter from my perspective. The coverage in this chapter is both historic and compact, insofar as much useful material is clearly presented in the few allotted pages. More than that, the chapter ends with an interesting perspective on future trends for both graphene and nanotubes. The first chapter does a good job in focusing on the optical and excitonic properties of carbon nanotubes. The third chapter, by Y. W. Song, also deals with both carbon nanotubes and graphene for use in mode-locking fast optics applications showing promise for both of these carbon nanostructures in high-power operation, and particularly for mode-locked fiber lasers. It may be that since nanotubes have been available for a longer time, there has been more opportunity to develop nanotube applications. Part I of the book also should be recommended for its good linkage between the modification of synthesis and sample preparation to the requirements of the particular optical requirements. It was surprising to see that there was no significant coverage of double-wall nanotubes (DWNTs) in Part 1 of the book since it is often said at conferences that the more robust mechanical properties of DWNTs would make such nanotubes more desirable for applications generally.

Chapter 4 by Gaufrès et al. of the CNRS in Paris provided a good general introduction to optical gain, lasing, and photonics, thus giving a strong general basis for laser applications. Chapter 5 by Martinez and Yamashita provides a succinct review of the use of nanotube- and graphene-based fiber lasers, showing significant progress in using nanotubes effectively, with graphene showing some promise but not as far along in development, and Chapter 6 by Cho and Rottermund confirms this conclusion for the use of nanotube-base bulk solid state lasers. Chapter 7 is a long theory chapter on the electromagnetic non-linearities in graphene which point to a significant potential for use in harmonic generation, frequency mixing, and multiplication. Chapter 8 is once again an experimental chapter on carbon nanotube non-linear photonic devices, emphasizing the possibility of incorporation of CNTs into a multifunctional device platform. It would have been interesting to the reader to have seen a clear take-home message on when carbon nanotubes are more effective for laser device applications and when graphene is preferable.

The book ends with five chapters on carbon-based optoelectronics showing the diversity of possible nanocarbon-based applications. Here we see Chapter 9 by Baker et al. of Purdue University reviewing the use of CNTs in various types of solar cells exploring their special optical properties including their use as active elements in organic solar cells and as electrode materials, concluding that CNTs will eventually become competitive for use in photovoltaic applications. Another general applications area discussed in Chapter 10 is for chemical sensing and biosensing. In addition to applications in photovoltaic cells, Chapter 11 by Peng et al. from Peking University discusses the use of CNTs in light emitting diodes, and their potential for integration in nanoelectronics and optoelectronics more generally. Chapter 12 by Wilkinson and Butt of the University of Cambridge emphasizes the potential of hybrid carbon nanotube–liquid crystal nanophotonic devices where the liquid crystals can be used to control carbon nanotubes properties. The final chapter of the book by Walden-Newman and Strauf is about making quantum light sources based on individual carbon nanotubes exploiting their spatial exciton localization along the tube.

Although the book is largely focused on applications now under development in carbon nanotubes, which have had more time for development than applications in graphene, researchers in the nanocarbon field are expecting that with time graphene applications will eventually become increasingly important. A reader of this book would likely have liked to see more emphasis given to a comparative discussion between the potential of each of these nanocarbons, telling the reader the best present forecast for commercially significant application for each of these nanocarbons.