Underwater actuator devices with a range of motion, including swimming and walking, are demonstrated via laser-control of density of composite hydrogels. 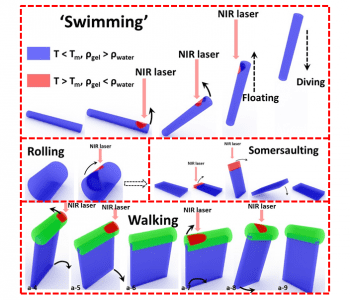 Taking inspiration from fish, researchers in China and Japan have developed a strategy for depth-controllable swimming devices.  Fish are able to move up and down to different depths in water by modulation of the amount gas in their swim bladder, varying the local density of their bodies.  Using a laser to control the density of a polymer hydrogel, various types of motion in water have been demonstrated, including swimming, rolling, somersaulting, and a “walking”-type motion.  These light-controlled hydrogel actuators will be useful in developing steerable mini-robots for use in water and other clear liquids. 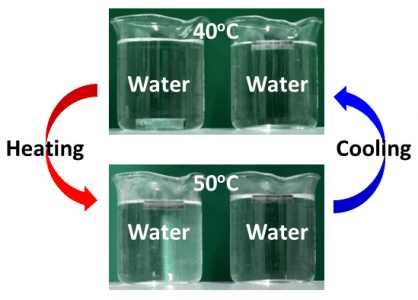 mer hydrogel is fabricated from three different components, in varying proportions.  Two types monomer—one denser than water, and one less dense than water—are copolymerized with a near-infrared-absorbent additive.  Stearyl acrylate, methacrylic acid, and reduce graphene oxide are used as the light monomer, the dense monomer, and the NIR-absorbent material respectively.  The ratio of light and dense polymer determines whether the composite hydrogel floats or sinks in water. For the sinking hydrogel, increasing the temperature causes the crystal phase of the stearyl acrylate to melt, decreasing the overall density, and the hydrogel floats to the surface.

In order to realize controllable swimming motion, density of the hydrogel must be altered in real-time.  The NIR-absorbent material in the blend provides a method of localized heating of the hydrogel, by irradiation with a NIR laser beam.  The crystalline stearyl acrylate in the vicinity of the laser beam heats up and melts, so the gel starts to float.  On removal of the laser beam, the cooling gel sinks back into the water.

For a rod-shaped hydrogel, swimming is achieved through illumination of one end of the rod.  This causes the rod to stand on end, and float upwards in a near-vertical position.  When the laser is removed, the tilting of the rod cause it to drift horizontally as well as sink, such that cycling the floating and sinking allows for a depth controllable horizontal swimming motion.  A cylindrical rod can also be compelled to roll, by illuminating only one side.  Somersaulting motion is achieved by illuminating one end of a rod or slab, then removing the laser when the gel is in a near-upright position.  Inertia about the bottom of the gel causes it to fall over to the other side. 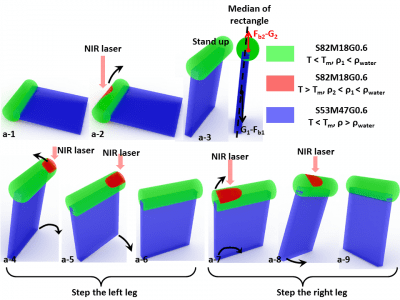 Impressively, a bipedal, “walking”-type motion has also been demonstrated in a hybrid structure of two different density hydrogels.  A low density rod is fused lengthways to the top of a higher density rectangular hydrogel such that center of gravity of rod is forward of that of the rectangle’s median plane.  Applying the laser to the center of the rod causes the structure to stand upright—the offset of the rod’s center of gravity causes the structure to lean.  Next, the laser is focused onto one end of the rod, causing that side to lift.  The leaning stance of the structure causes the hydrogel to pivot about the lower corner, and when the laser is removed the raised side sinks back down, with the structure now facing slightly sideways as well as tilted forward.  Repeating the procedure and alternating the lifted sides allows the hydrogel to shuffle forward in the manner of a stiff walk.