Irradiation with a blue-LED haemostatic device improved the healing process in superficial skin wounds without adverse side effects. 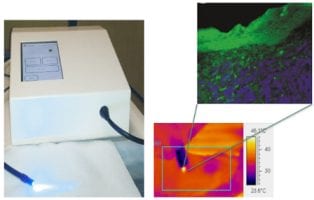 Irradiation with a blue-LED haemostatic device improved the healing process in superficial skin wounds without adverse side effects.

Since its invention in the early ’90s, blue-LED technology has found several applications in biochemical and biomedical fields. One is that irradiation with blue light can stop the bleeding of wounds. The absorption of haemoglobin at narrow peaks in the blue range (410 nm and 430 nm for oxygenated and non-oxygenated haemoglobin respectively), showing an absorption coefficient much higher than skin chromophores. The effect can be used to ensure a local temperature increase that is able to induce hemostasis through a photo-thermo-coagulation process. 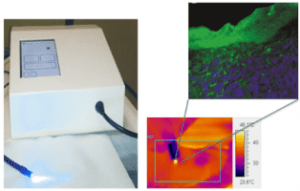 The Blue LED photocoagulator device enables an immediate stop of bleeding and an improved healing process in superficial skin wounds.

Does blue light treatment also affect the healing process of superficial abrasions? Researchers from the National Research Council and the University of Florence in Sesto Fiorentino and Florence (Italy) now addressed this question. They used a blue-LED photo-haemostatic device which had been developed as a part of a project called LighTPatcH within the Biophotonics plus call 2012 initiative. The compact, easy-to-handle optical fiber-coupled device emits the two wavelengths matching the main absorption peaks of haemoglobin in the blue region.

In the study, mechanical abrasions were induced on the back of 10 Sprague Dawley rats. Half of them were treated with the blue-LED device, while the others were left to naturally recover. The induced photothermal effect was monitored during treatment by the use of a thermocamera. Visual observations, non-linear microscopic imaging, histological and immunofluorescence analyses were used to study the healing process 8 days after the treatment, and LED treated and untreated wounds were compared.

The Italian scientists found a faster healing process and a better-recovered skin morphology in treated abrasions with respect to the control wounds. The wounds irradiated with blue light showed a reduced inflammatory response, a higher collagen content as well as a better recovered morphology and organization of dermal collagen. No adverse reactions neither thermal damages in both abraded areas and surrounding tissue caused by the blue irradiation were observed. The results support the hypothesis that the selective photo-thermal effect used for inducing haemostasis in superficial skin wounds is associated to a faster healing process.
(Text contributed by K. Maedefessel-Herrmann)