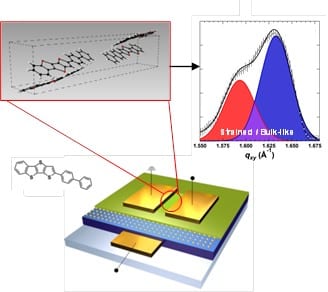 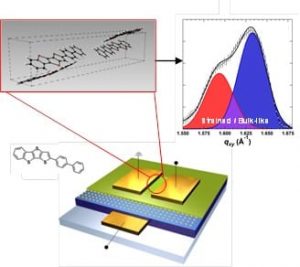 The thin film molecular packing motifs of several new benzo[d,d]thieno[3,2-b;4,5-b]dithiophene (BTDT) derivatives have different molecular packings from their bulk crystals. Co-existence of strained lattices with their single crystal forms is speculated to have a significant effect on OTFT performance.

Thin-film transistors based on organic semiconductors (OTFTs) may enable a new generation of electronic devices as well as enhance our understanding on how charge transport occurs in molecular solids. Of the factors directly affecting OTFT charge transport, the molecular packing motifs within the semiconductor crystalline domains and the degree of connectivity between adjacent domains are both of prime importance. In particular, due to the highly localized nature of the charge transport near the gate dielectric, the structure of the first few monolayers of the organic semiconductor has critical influence on the pathways taken by the charge carriers through the OTFT.

However, detailed information about molecular organization in polycrystalline thin films is not available for the vast majority of organic molecular semiconductors. Now, in new work, the molecular packing motifs of several new benzo-thiophene derivatives have been characterized both in bulk 3D crystalline form and in thin-film form by single-crystal diffraction and grazing-incidence wide-angle X-ray scattering (GIWAXS), respectively, revealing new OTFT performance-structure correlations.