Behind the Scene: Using Light to Modulate Vesicle Shapes 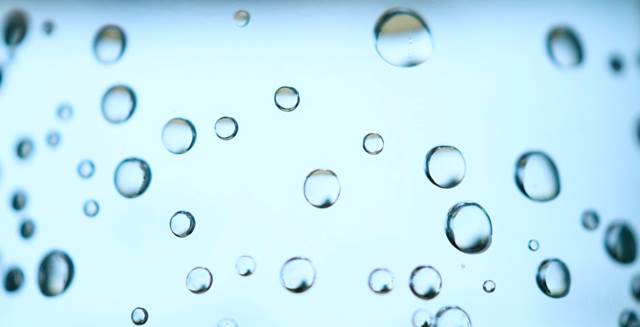 The cellular plasma membrane and membrane-bound organelles in cells exhibit a plethora of morphologies. Their shape is related to functionality. Proteins are among the strongest players in remodeling membranes, but alternatives based on optomechanics, i.e. using light to modulate shape, have barely been explored. Giant unilamellar vesicles (GUVs) are cell-sized membrane capsules, which basically represent empty cells free of proteins. They are frequently used as a system to mimic the plasma membrane and to explore shape-related processes occurring at the membrane level such as endo- and exocytosis. Previous studies have explored the response of GUVs when exposed to osmotic stress, pH gradients, detergents, polymers etc. However, these external stimuli pale compared to light when it comes to swiftness and reversibility of the vesicle response or contactless application of the stimulus. 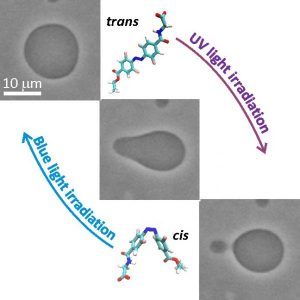 Photosensitive molecules, which are able to reversibly undergo isomerization under illumination, offer direct conversion of light into mechanical energy. Thus, when coupled with GUVs, they offer an attractive approach for studying processes involving membrane remodeling. Azobenzene derivatives have been employed as photoswitches to control the morphology and the stability of GUVs. So far, photoswitches that require UV irradiation and strong irreversible intercalation in the membrane have been employed. These molecules are cytotoxic, have a surfactant-like nature or are insoluble in water and thus difficult to administer.

In their work, Dimova et al. study light-triggered morphological transitions in GUVs in the presence of a novel ortho-tetrafluoroazobenzene derivative (F-azo). The researchers observed reversible morphological changes in GUVs, in particular area increase and expelling of daughter vesicles (or out-buds) and re-adsorption of the out-bud(s) into the vesicle body in response to trans → cis and cis → trans F-azo isomerization, respectively. The process mimics reversible exocytosis.

“Using light to modulate shapes of objects, such as cell-sized membrane capsules, looks like making magic: you don’t touch them, yet you deform them. This magic is the basis of optomechanics of soft organic materials, the cell membrane being one example”, says the corresponding author of this study, Rumena Dimova.

Using both experimental and theoretical approaches, the mechanism of the observed out-budding event was revealed. Namely, F-azo makes the membrane curve outward (i.e. induces positive membrane spontaneous curvature) and the trans → cis photoisomerization of the molecules causes an increase in the membrane area. Additionally, employing molecular dynamics simulations the researchers showed the partitioning and the exact molecular positioning of F-azo in the membrane. The group was able to demonstrate that the shape and morphology of membranes can be controlled by photoswitches which mildly interact with the membrane. One remaining challenge is to establish the vesicle exocytotic-like response solely using visible light. Shifting the absorbance of the F-azo molecules more to the red or increasing their molar extinction in the green region would possibly solve the problem and render the photo switches even more attractive for in vivo applications.