Any which way you can: Nano-toolboxes for programmable self-assembly 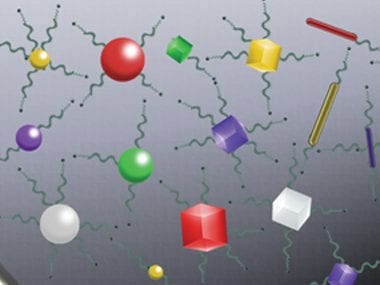 They say that nothing worthwhile is ever easy. Biology gives the lie to that statement, however. Many of its most complex and useful structures, like ribosomes, are produced from one of the easiest processes of all, self-assembly. The trick, of course, is supplying the right building blocks.

DNA-based self assembly could be a powerful tool in nanotechnology. The template-matching hybridization reaction between DNA oligoneucleotides is capable of Turing-universal computation. In other words, anything that is computable can be computed by a DNA-based computer, which is exactly as powerful as any other computer. In this way, engineered systems of biological material could be programmed to build any structure or implement any computable function.

In a new review in the journal Particle & Particle Systems Characterization, Jin-Woo Kim and Russell Deaton discuss the challenges and strategies of programming the self-assembly of nanoparticles into complicated, anisotropic shapes. As they see it, the first fundamental challenge is the creation of a building block that can be used to build anisotropic nanostructures with diverse compositions and geometries. The second is to design both the structure and function of the nanostructures. By functionalizing DNA one at a time to the nanoparticle, a DNA nanoparticle building block could be designed with distinct DNA sequences at different locations on the particle surface.

By controlling form and function, you can find the right toolbox for every job.