Anisotropic conductive films can be produced by shear flow that induces the self-assembly of conductive fillers (like carbon nanotubes, graphene or inexpensive carbon black) into parallel stripes in a polymer matrix. 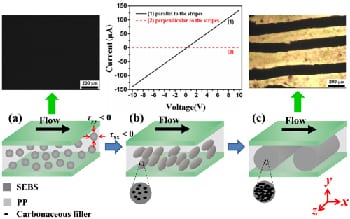 Material with a significant performance difference in two perpendicular directions are called anisotropic materials. In our life, there are a large number of anisotropic materials, such as wood, bamboo or muscles. Anisotropic conductive composites with orientated micro- or nano-structure have received growing attention because of their important applications in microelectronic devices, photoelectric devices and packaging materials. Orientation of conductive fillers in a polymer matrix can for example be achieved by an magnetic field, an electric-field or mechanical stretch. 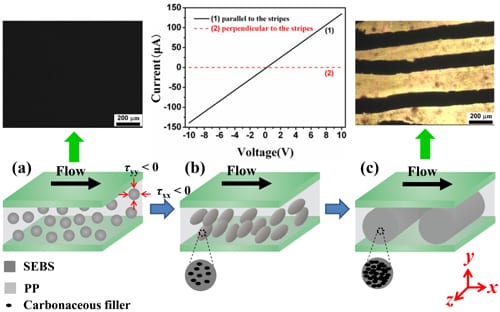 It was found that the optimal loading of the conductive fillers for the well-ordered parallel stripes are dominated by the dimension of the fillers. The optimal loadings for forming well-ordered parallel stripes are 2.5 wt%, 1.5 wt%, and 1.5 wt% for zero-dimensional CB, one-dimensional CNT, and two-dimensional GE, respectively. Interestingly, the electrical resistivity in the direction parallel to the CB stripes is almost 8 orders of magnitude lower than that in the perpendicular direction, which is superior to GE or CNT filled systems.

The mechanism of the formation of parallel stripe structure was investigated by rheological techniques and online morphological evolution. This investigation revealed that the vorticity alignment of the carbonaceous filler stripes under shear originates from the negative value of the first normal stress difference in the system. The proposed method of the shear flow induced self-assembly can provide a new route for the design of multifunctional anisotropic polymer composites.