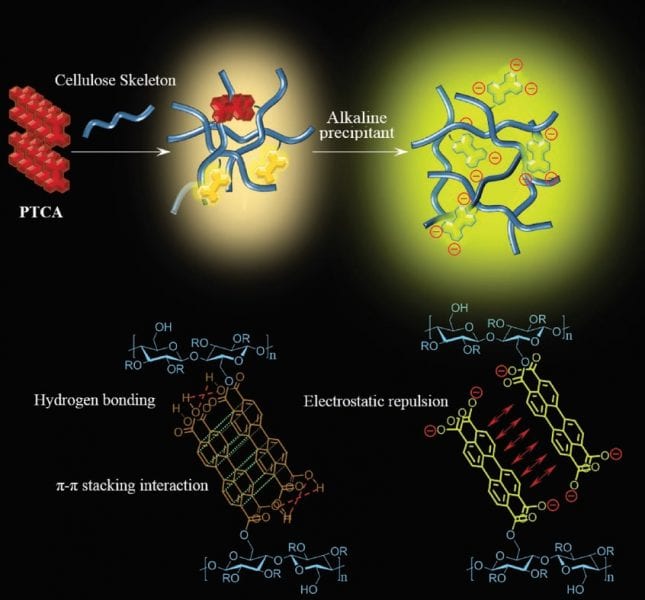 Organic fluorescent materials are a large family of substances that can emit light by absorbing light or other electromagnetic radiation. They have many practical applications, including fluorescent labelling, bio-imaging, security printing, criminal fingerprint tracing, biological detectors, chemical sensors, cosmic-ray detection, etc. Commonly, fluorescent materials are expected to be utilized in their solid state, for instance, solid state lighting and display, photovoltaics, fluorescent coating. However, the majority of commercial organic fluorescent substances present remarkable fluorescence only in extremely diluted solutions (ca.10-5 M). Their emission is utterly quenched in concentrated solutions and solid state, because these fluorescent molecules tend to aggregate together. Consequently it triggers aggregation-caused quenching (ACQ), an ubiquitous phenomenon existing in aromatic conjugated compounds. Such a detrimental property has prevented the conventional fluorescent substances from being used as solid-state fluorescent materials. 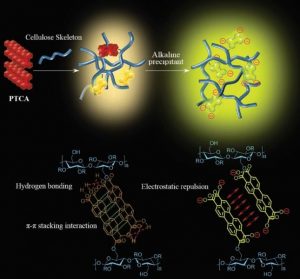 Weiguo Tian, Jinming Zhang, Jun Zhang and other co-workers from the Institute of Chemistry, Chinese Academy of Sciences present a brand new strategy for fabricating organic solid fluorescent materials containing aggregation-caused quenching luminogens. They overcame the aggregation-caused quenching by simply coupling ionization with covalently bonding ACQ luminogens to cellulose chains to achieve an excellent solid fluorescent material. The cellulose chains slow down the thermal motion of ACQ luminogens, while isolating the ACQ luminogens from each other. Furthermore, the electrostatic repulsion amongst ACQ luminogens is introduced to hinder them from aggregating together. Such a general strategy is also suitable for various ACQ luminogens and host polymers.

More importantly, the resultant solid fluorescent materials preserve good solubility and easy processability of original cellulose derivatives, therefore it shows great flexibility in material fabrication. The materials can readily be processed into printing pattern, coating, film, fiber, and colloid, etc. The convenience of this synthetic process and the abundance in raw materials (both cellulose and ACQ luminogens) give a huge potential to the applications of common ACQ luminogens in practice.