A flexible flow lithography technique enables 3D particles to be formed in a layer-by-layer fashion, based on the controlled stacking of 2D shapes. 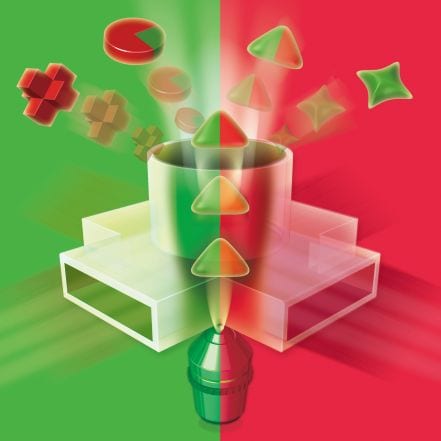 For the production of anisotropic polymer microparticles – particles which have application just about everywhere – flow lithography has been marked as the technique of choice. This is an extrusion technique employing photocurable resins, which are injected into microfluidic systems and solidified (cured) upon irradiation with UV light. The shape of the particles produced is controlled by adjusting the pattern of exposure to the light.

This works well for 2D shapes, but what about 3D particles?

Adding a dimension greatly increases the complexity of the shapes available, including segmented/compartmentalised particles, which also greatly increases their functionality. This is a bit of a challenge with flow lithography, however, as the irradiation is fixed perpendicular to the flow direction of the resin. 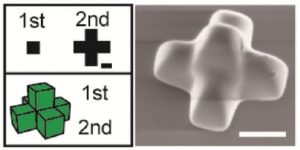 Now, researchers working in Japan and South Korea have demonstrated a more flexible technique they call vertical flow lithography (VFL), enabling the direction of irradiation to be aligned with the flow direction. This means that 3D particles can be formed in a layer-by-layer fashion, based on the controlled stacking of 2D shapes.