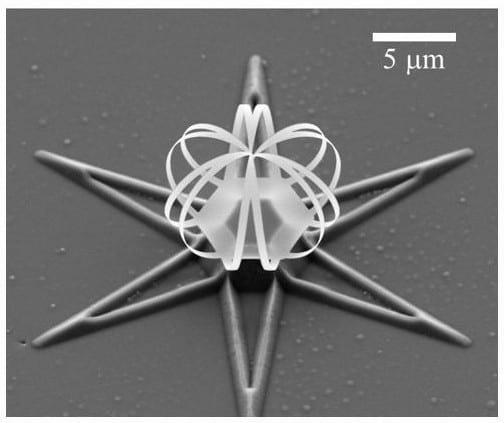 Self-organising complex 3D structures on the nanometer scale hold tremendous promise in wide-ranging nanotechnological devices with important optical and biological applications. One of the key challenges facing researchers, however, lies in developing a fabrication process with extremely high precision, control, and reproducibility.

A team from the Aalto University in Finland in collaboration with the University of Washington has made an important breakthrough utilising a phenomena that can be commonly observed outside the laboratory in the natural world, from the curling of flowers to the opening of seed capsules in ice plants: deformation through stress-relaxation. As reported in Advanced Materials, the researchers (K. Chalapat, N. Chekurov, H. Jiang, J. Li, B. Parviz and G. S. Paraoanu) from Aalto University have demonstrated how two different techniques, namely, reactive ion etching and focused ion beam, can be used to induce stress at defined locations on very nanometer-sized polycrystalline metal films, ultimately enabling them to manipulate the films into the desired complex 3D geometries.

Reactive ion etching, a technique commonly used for cleaning silicon wafers, involves exposure to a low-pressure plasma, in which high-energy ions collide and react with the substrate. When this technique is applied to thin strips of metal film on silicon wafer, this results in the insertion of adatoms into grain boundaries within the metal matrix. This induces a compressive stress, which, upon relaxing of the film, causes it to bend (see the figure to the left and the video at the bottom of the page). Interestingly, the extent of bending (radius of curvature) was found to be dependent on the width of the metal, thus permitting control over the final 3D geometry. Exploiting this concept, the team demonstrated a functional microscopic metallic flower-like structure (see below), with the capacity to trap microparticles (as a proof-of-concept, lactose particle were employed). 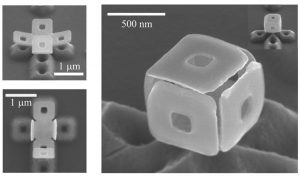 Using the more well-known process for fabricating defined nanometer-sized structures, focused ion beam (FIB), which involves bombarding the substrate with a beam of gallium ions, the researchers found that nanometallic cantilevers bent strongly toward the incident direction of the ion beam, effectively due to the compressive stress that results from atomic displacement. Moreover, a theoretical treatment showed that for a given material, the amount of bending is exclusively determined by the fluence of beam, meaning that by controlling the strength of the ion source, one can manipulate materials on the nanometer scale with extremely high precision and control. A remarkable example of this in practice is the fabrication of a nanobox (see below).The remarkable precision and control afforded by the novel methods reported here represents an important nanoengineering advance with far-reaching and exciting future applications.