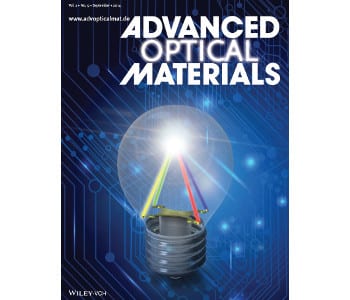 These articles were highlighted on the covers of the Advanced Optical Materials September issue:

Solid-State Lighting
The image shows an artist’s abstraction of digitally controlled RYGB lasers color-mixed to create white light, created by Hanqing Kuang and George Wang. The long-term route to ultra-efficient and smart lighting might well be some variant of this architecture, as phosphors must give way to multi-color semiconductor electroluminescence. The current status of solid-state lighting is reviewed by J. Y. Tsao et al., including some of the associated technological challenges. 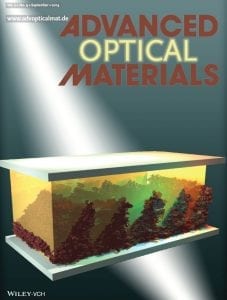 Light Harvesting
Patterning one-dimensional gratings on the surface of nanocrystalline titania electrodes is used as a light-harvesting strategy to improve the overall performance of dye solar cells under both frontal and rear illumination conditions. As described by H. Míguez and co-workers, this feature is a key advantage over other light-harvesting efficiency-enhancing methods, in which the performance of the cell under illumination from one of its sides is enlarged at the expense of reducing the output under reverse irradiation conditions. 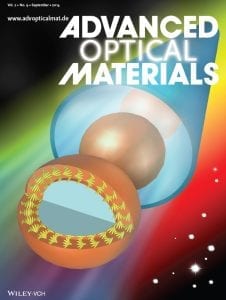 Microshells
A self-organized, phototunable 3D photonic superstructure is fabricated from a photoresponsive 1D liquid crystal using microfluidics. Q. Li and co-workers show how the resulting monodisperse microshells are water-oil-water double emulsions, in which the oil phase consists of the photoresponsive liquid crystals. The cholesteric microshells exhibit band-edge lasing in all directions, and the wavelength of the resultant band-edge laser is tuned via the pumping laser, causing photoisomerization of the chiral molecular switch.