Check out the articles highlighted on the covers of the first issue of Advanced Optical Materials for 2015. 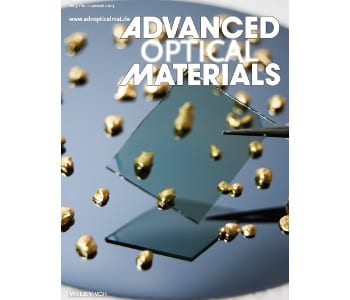 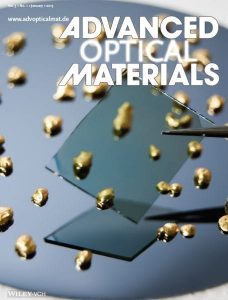 These articles were highlighted on the covers of the first issue for 2015 — the Advanced Optical Materials January issue:

Gold films, made suitably thin, exhibit high transparency and high conductivity at the same time. A. Kossoy, K. Leosson, and co-workers from the University of Iceland and Imperial College London have fabricated continuous gold films as thin as approximately 5 nm on glass substrates, using conventional deposition techniques. Experiments show that transmission of light through such films is consistently lower than the theoretically expected value, an effect attributed to atomic-scale interface roughness.

When giant nanocrystal quantum dots (g-NQDs) are coupled to graphene, pairs of excitons optically excited in the g-NQDs experience efficient recombination and subsequent simultaneous emission of photon pairs. This enhancement is provided by a localized plasmon supported by a charge puddle that forms underneath the photocharged g-NQD. H. Htoon and co-workers reveal the tremendous potential of graphene-g-NQD hybrids for lasing and entangled photon source applications.

T. Tanaka and co-workers characterize a large-scale 3D metamaterial structure, consisting of fourfold-symmetric 3D split-ring resonators (SRRs). Formed by a metal stress-driven self-folding method, these metamaterials demonstrate an isotropic property for any lateral rotation, due to the interplay of the electric and magnetic interactions of the 3D SRR.