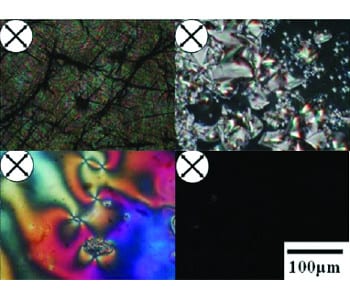 The 1930s saw the first reports on a class of materials that would become known as epoxy resins. Since then, epoxy resins have become some of the most widely applied industrial polymers; they are found in adhesives, coatings, electrical insulators, and many other industrially important materials. One subclass of epoxy resins, liquid crystalline (LC) epoxy resins, is now attracting new attention. Compared to conventional epoxy resins, LC analogues often have enhanced properties; for example, higher glass transition temperatures, greater fracture toughness, and better thermal conductivity. Despite these promising features, even greater use of these materials has been hampered by their limited stability. In the Journal of Applied Polymer Science, a Kansai University group led by Prof. Miyuki Harada describes the synthesis and properties of a new acid-resistant LC epoxy resin.

The decomposition of previously reported resins arises from the readily hydrolysable Schiff base moiety. The challenge for Harada and co-workers was to design a LC epoxy resin without incorporating the acid-sensitive Schiff base unit. The team achieved the goal using a methyl-branched terphenyl scaffold as the basis for the new resin. As Harada explains, “generally, liquid crystalline epoxy resins contain polar chemical bonds (C=O, C=N, etc.). However, their chemical resistance for industrial use must be improved while maintaining their excellent mechanical properties.  The terphenyl structure is suitable but the synthesis was not achieved without introduction of the methyl branch because of the terphenyl structure’s rigidity.” 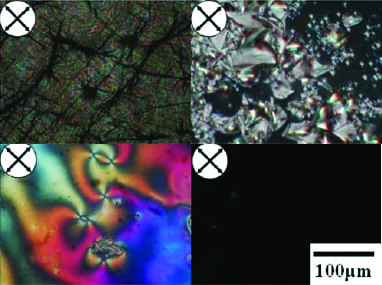 Various phases of the terphenyl based liquid crystalline epoxy resin, as seen in polarized optical micrographs.

The Japanese group plans to continue their groundbreaking work by attempting to improve the processability of the material, “We will now try to decrease of melting point of the liquid crystalline epoxy monomer because high melting points prevent practical use and make curing preparation difficult,” says Harada.

Expanding the Capabilities of IR Spectroscopy
Computational electromagnetics: Know your tools for they shape our future
Color-changing liquid-crystal films for advanced optical devices
Light in Sight: Micro-Lenses Enhance the Functionality of Future Cars