A Universal Influenza Nanovaccine to Block Infection from Pigs

Researchers in China develop a novel vaccine that could pave the way to preventing cross-species transmission of influenza A. 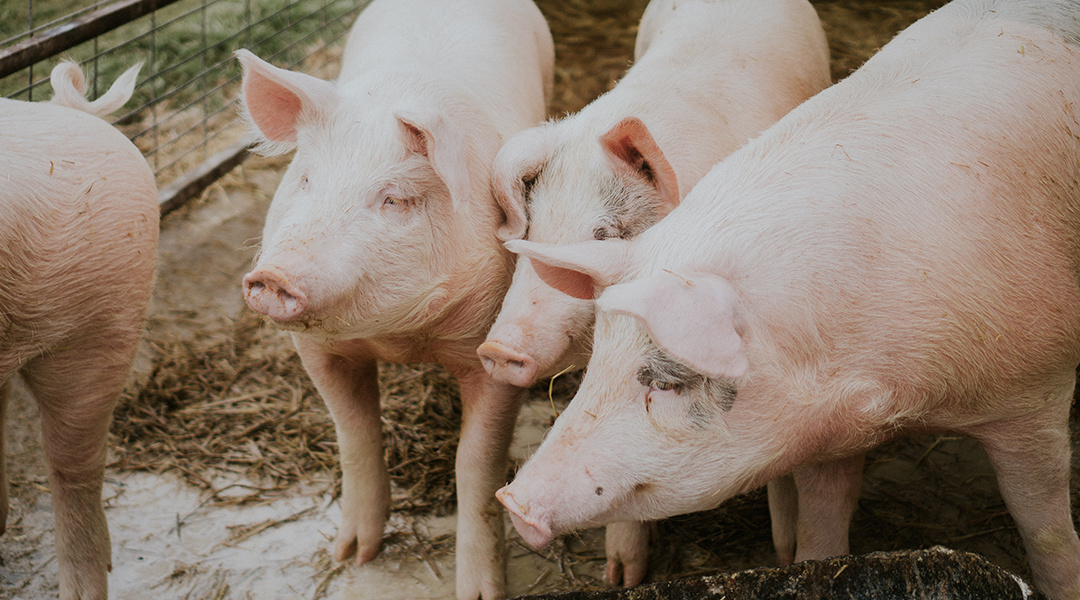 Influenza A viruses are highly infectious respiratory pathogens that can infect many species. The virus is highly contagious, spreads rapidly, and has a remarkable ability to quickly evolve, which leads to its great variability. The virus originates from birds, which are known carriers of all influenza A subtypes, with new strains emerging and infecting mammalian species, such as humans.

Pigs play an important role in influenza virus ecology and are involved in interspecies transmission, as they are susceptible to infection with both avian and human influenza A viruses. Co-infection of both human and avian viruses within the same pig can lead to genetic reassortment, which results in mixing of influenza viral segments, and new influenza A strains. If new viral strains are transmitted to humans and spreads from person-to-person, a new influenza pandemic can occur. This was previously observed in 2009 when an influenza A H1N1 virus with swine, avian, and human genes emerged, causing the first pandemic in 40 years. 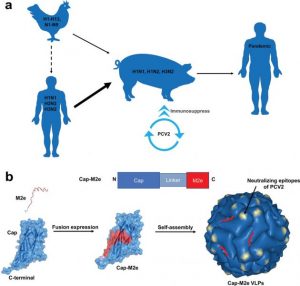 In a recent report, Professor Gaiping Zhang of the Henan Academy of Agricultural Sciences and coworkers propose that effective control of swine influenza viruses is a key strategy for reducing the probability of cross-species transmission and future influenza outbreaks.

Most human influenza vaccines do not protect people from viruses circulating in pigs, and given the high mutation rates of influenza A viruses, current vaccines only provide protection against matched strains. An effective, broad-spectrum vaccine is therefore urgently needed.

The team proposed that such a vaccine could be derived from the influenza matrix protein 2 (M2e), which is ideal because it is the most conserved protective epitope (a small structural element or small peptide that is recognized by the binding site of an antibody) in all influenza A subtypes.

Research in this area has shown that while M2e is a promising antigen for a universal vaccine, it has demonstrated poor immunogenicity and protection. So, while it does reduce the severity of the illness, it does nothing to prevent initial infection and thus has seen limited clinical application.

The current study aims to control influenza A in pigs by simultaneously targeting influenza A as well as the porcine circovirus type 2 (PCV2), a virus that pigs are highly susceptible to, which suppresses the animal’s immune system and increases the risk of influenza A infection.

The team therefore developed a vaccine based the capside protein of PCV2—a structural protein that is part of the complex forming the protective shell around the nucleic acids of the virus—which self-assembles to form virus-like particles (see figure). The C‐terminal of the PCV2 capside protein is exposed on the surface of PCV2, to which the researchers attached M2e. This novel bivalent nanovaccine was expressed in E. coli, making it economical and suitable for large‐scale production.

M2e‐ and PCV2‐specific immune responses were observed in mice inoculated with the new vaccine, and it was shown to protect them from a lethal challenge of various swine, human, and avian influenza A viruses. The nanovaccine also significantly reduced infection in pigs’ respiratory tract and blocked the transmission of influenza A between animals used in the study, demonstrating its dual protection against influenza A and PCV2.

These results indicate that the PCV2 and universal influenza A nanovaccine is an economical and promising synergistic tool with the potential to block cross‐species transmission, and hopefully minimize future pandemics.