The design of a new bionic skin that is sensitive to incredibly small changes in pressure and vibration is reported.

As the tasks performed by robots become ever more advanced, their sensory capabilities must keep pace. Without accurate and detailed information about their environment, their range of activities would be limited. While robotic vision and hearing might receive much of the limelight, the field of bionic skin mimicry has also seen a rapid expansion in recent years. 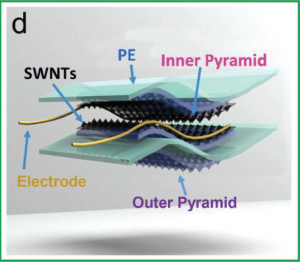 A paper in Small, reports the design of a new bionic skin than is sensitive to incredibly small changes in pressure and vibration. The researchers from China employ a sensor that was originally reported as a bionic eardrum, and apply it to the field of tactile perception.

A schematic of the device is shown (left). When the two interlocking layers of the device press together this changes their contact area. This in turn alters the resistance of a circuit that is formed from the two layers and the visible yellow electrodes. The schematic below, shows how surface roughness can be detected by the device.

The device is compared with other sensors in the field by measuring the minimum distance between fine lines that it is able to perceive. The device was able to discern line distances of as small as 15 μm, considerably smaller than comparable technology. 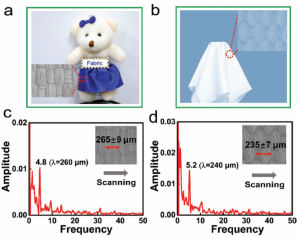 The fine discernment of this invention, opens up subtle sensory opportunities. This device is able tell the difference between two different types of silk (right). These silk samples have weave repeats of 265 and 235 μm. A difference that is well within the sensory limits of this device.

The device is also able to ‘read’ braille. It was shown to reproducibly recognize the word ‘Sinano’ the abbreviation of the research group’s institute. The authors hope that given the sensitivity and broad utility of their invention, it might have applications in robotics and artificial intelligence.