The device provides a powerful tool for studying and treating diabetes, allowing personalized modelling by using patients’ own cells. 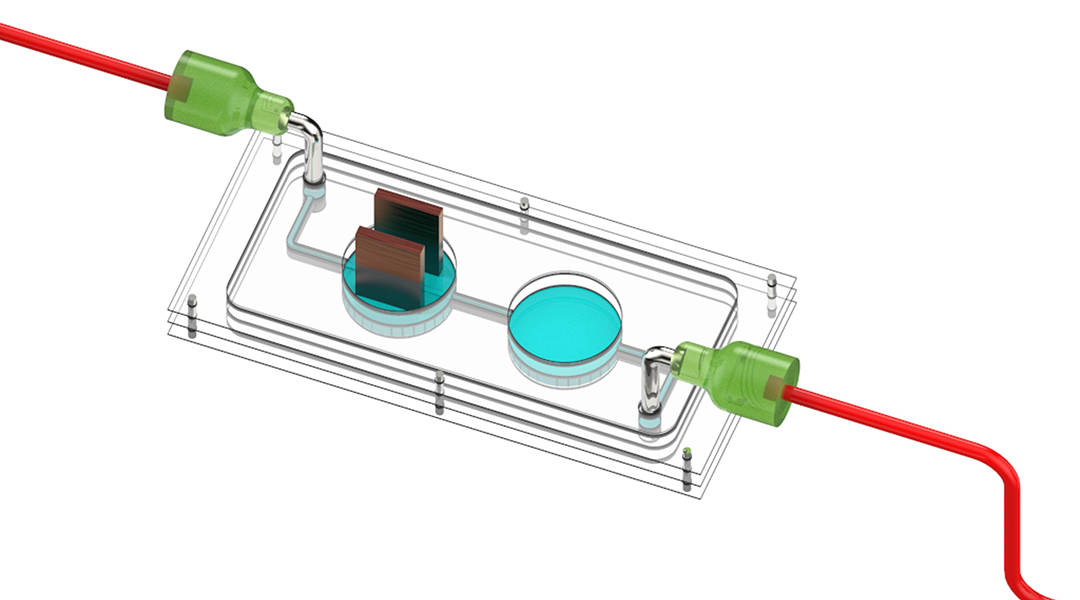 Using a novel bioengineered chip combined with synchronous chemical monitoring, researchers showed that muscle contractions induce insulin production in pancreatic cells. The multi-organ-on-chip, as it is known, could help demystify the biology of diabetes.

The study of disease and drug development has long relied on cellular and animal models. Advances in the last decade have led to innovative models created with the hope of replacing or reducing the use of animal models.

Organs-on-chips are micro-scale versions of human organs, usually trapped between two layers of silicon or plastic. While these organs-on-chips are not literal miniature clones of the specific organ, the entrapped cells represent the biological, biochemical, and mechanical aspects of the organ on which they are modelled.

More than a decade ago, researchers first crafted a lung-on-a-chip, and now, several other organs have chip counterparts, such as the liver, kidney, gut, pancreas, heart, and even the brain. Researchers can even model the immune system or diseases, such as breast cancer with these systems.

By placing multiple organs-on-a-chip, scientists hope to study disease and drug efficacy on the human body as a whole.

In a recent study, Javier Ramón-Azcón, a researcher at the Institute for Bioengineering of Catalonia in Spain, and colleagues crafted a chip to test how exercise would affect the production of insulin using two different tissues: skeletal muscle and pancreatic cells.

“The idea was to grow and differentiate both tissues separately in the optimal conditions and only put them together in the final experiment,” said Ramón-Azcón.

The two tissues were brought together in the slim cassette of the multi-organ device: one chamber housed muscle tissue and the other, the pancreatic cells. The chambers were linked with a fluid-filled channel in order to establish a chemical connection between the tissue types. A nutrient-rich fluid flowed from a small reservoir well to the muscle chamber, on to the pancreatic chamber, sensing system, and is then ultimately discarded.

To establish a “training” model, one where muscle contraction or exercise was being mimicked, the skeletal muscles were given a gentle electric shock. For this purpose, the muscle tissue chamber within the chip was outfitted with minuscule electrodes. When provided an electrical stimulus, the muscle fibers would contract.

Then, the chip was connected to a sensing system. This biosensor aided in the real-time monitoring of two different molecules — insulin released from pancreatic cells and myokine interleukin-6, a chemical secreted when muscle cells undergo contraction.

Once this setup was ready, the researchers administered an electrical shock to the muscle fibers. This stimulus triggered the release of both myokine and insulin. “We were able to monitor the secretion of the myokine in real time and determined that the secretion is produced immediately when muscle contraction was induced electrically,” said the study’s first author, Juan Fernández-Costa.

By integrating the multi-organ chip with constant and concurrent biosensing, the researchers were able to observe chemical communication between muscle and pancreatic cells in real time. “This crosstalk is an essential feature because it opens the gate to studying multi-systemic diseases, such as diabetes, and the effects of drugs on different tissues,” said Ramón-Azcón.

Future iterations of the chip could include other tissues relevant to understanding diabetes, such as the liver of fat tissue, or superior sensing technologies. But despite the promise it holds for understanding disease biology and clinical research, the multi-organ-on-chip still has some kinks that need to be worked out.

“The process of integration is time-consuming and requires a lot of [experts] working in a synchronized way to make it successful,” added Ortega.