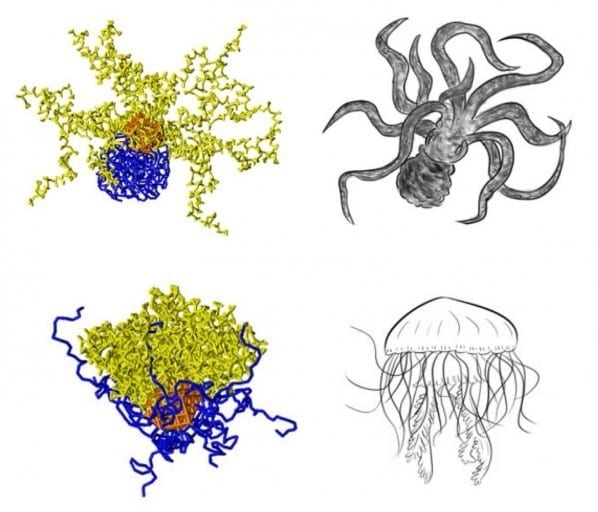 Spherical inorganic nanoparticles surface-modified with smart polymer brush chains have become known as a new type of composite materials, which have been dubbed smart ‘hairy particles’. The polymer brush layer grafted on the surface protects the stability of the particles and at the same time provides a diverse number of applications depending on the kinds of responsiveness of the brushes. Among the various kinds of responsiveness, solvent responsiveness provides nanoparticles with a variety of application possibilities in emerging research fields.

Relatively little work on solvent responsive polymer-grafted hairy particles by computer simulation at the microscopic level has been published. Nonetheless it is of great importance in the research and design of this new kind of nanomaterial to understand how block sequence and mixing mode influence their morphology and solvent responsive mechanism.

Now, the group of Jian Zhou (South China University of Technology, China) has used a series of typical systems, polystyrene(PS)/polyethylene oxide(PEO)-grafted gold nanoparticles, as a model system to study its solvent responsiveness. 32 brushes consisting of 30 monomers are grafted on the surface of gold nanoparticle with ca. 2.5 nm diameter for each system. The four block brush modified systems include two diblock ones (PS15–b-PEO15 and PEO15–b-PS15) and two triblock ones (PS10–b-PEO10–b-PS10 and PEO10–b-PS10–b-PEO10). The two modes of copolymer brush (15 PS brushes and 15 PEO brushes) mixed modified systems include the alternatively mode and the Janus mode.

The solvent selectivity and responsive behavior on the morphology, surface chemistry, particle size, brush flexibility and mobility of PS/PEO brush of six systems in five solvents with different polarity are studied by coarse-grained molecular dynamics (CGMD) simulations based on Martini force field. By exchange between collapsed state and extended state, polymer brushes and blocks on the spherical surface endow the system a few remarkable morphologies including typical core-shell, Janus-type, buckle-like, ring-like, jellyfish-like and octopus-like structures. Influence of block sequence, traction and restriction effects, perturbation effect and steric hindrance are compared and discussed by analyzing the brush layer distribution and gyration radii. Also, responsiveness is demonstrated by observing and comparing the equilibrium state when exchanging the environment between polar solvent and apolar solvent.