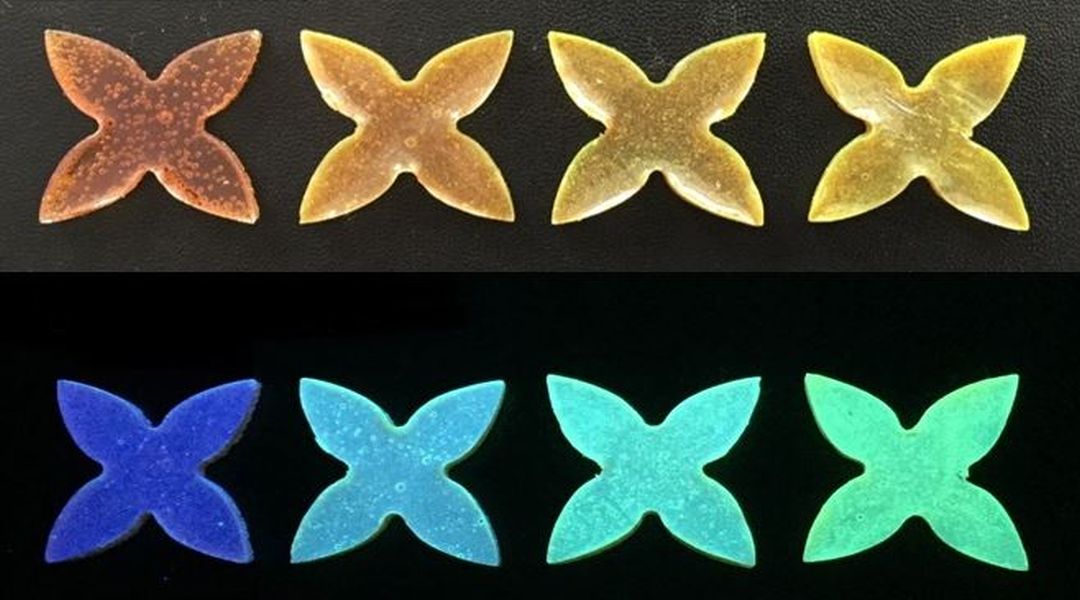 Glass is an amorphous material that can have an inorganic, organic, or metallic composition. Silicate glasses are the most ubiquitous, having a number of applications ranging from windows to optical lenses. The drawback lies in its processing, which requires high temperatures and/or pressures, rendering it unsuitable for manufacturing delicate nanoscale structures required for various specialized applications. In contrast to silicate glass, organic glasses, which include polymeric and molecular glasses, are either not well-defined or difficult to process, respectively.

In response to the need for an organic glass that combines the advantages of both polymeric and molecular glasses, Woong Kim and colleagues have prepared a fluorescent organic glass (FOG) with well-defined features that is easily synthesized and processed.

The synthesis involves heating benzyl alcohol with aqueous sulfuric acid to produce a viscous, yellow solution that forms a brittle solid in good yield (up to 88%) when cooled.

Characterization of the FOG revealed its outstanding optical properties, including high values for refractive index, quantum yield, and Abbe number; high thermal stability and low glass transition temperature; and rheological properties that allow for molding, blowing, and nanopatterning. In addition, the FOG was durable under harsh weather conditions and immersion in dilute acid and base.

The FOG molded into various shapes.

The photoluminescence (PL) spectrum indicated that the PL peak is fixed regardless of excitation wavelength, suggesting that the fluorescence centers in the FOG have well-defined, conjugated molecular structures. Structural characterization combined with spectroscopic analysis further revealed that the structure of FOG is likely composed of a 1,2,3,4-tetraphenyl-1,3-butadiene (TPBD) core with poly(phenylenemethylene) (PPM) branches.

The FOG’s brittleness would need to be improved for applications requiring high mechanical strength, but the properties of this FOG surpass those of typical polymeric and molecular glasses and show promise for optoelectronic and photovoltaic applications.

Read more about this novel type of glass here.