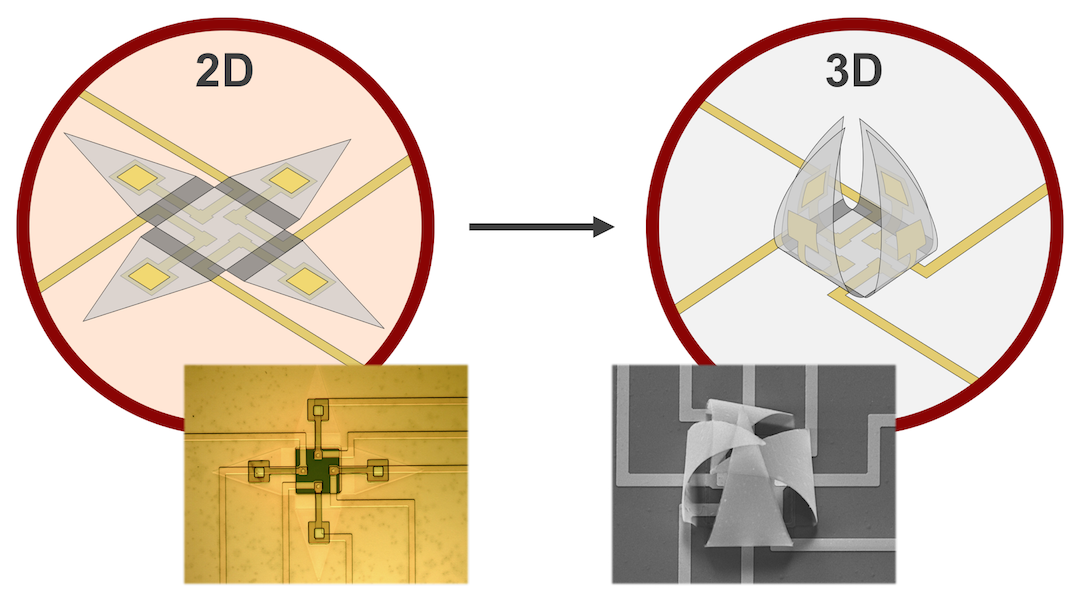 Certain types of cells such as heart and brain cells have a remarkable property called electrical excitability. It is the fundamental process behind electrical phenomena such as the nerve impulse, the heartbeat, and sensory perception. Recording the activity of such electrogenic cells is of great importance to understand their function, especially in the field of medicine, pharmacology, and contemporary neuroscience.

Microelectrode arrays (MEAs) feature numerous tiny electrodes that can easily interface with electrogenic cells and record their activity. For decades, a large variety of chip-based MEAs have been developed and applied to cell recording and stimulation. However, while cells are essentially three-dimensional objects, to date MEA electrodes have been inherently two-dimensional and rigid. Consequently, they can only record from the bottom interface of the cell–electrode contact.

Jordi Cools and co-workers from imec (Leuven, Belgium) and Johns Hopkins University have therefore developed a first-of-its-kind multielectrode shell chip with self-folding electrodes that can wrap around cells, bridging the gap from 2D planar recordings to more complex 3D interfacing. Their self-folding shells contain four electrodes that can independently record signals around the 3D contour of the cells. In doing so, the researchers found that it was possible to record with significantly higher signal-to-noise ratios as compared to planar electrodes. In addition, since the electrodes can record independently, 3D spatiotemporal maps of the electrical cell signal could be generated.

It is noteworthy that the devices were fabricated using conventional cleanroom technology, allowing cost-effective scalability to a larger number of devices, and integration with microfluidics or optical interconnect layers. It is anticipated that this new platform can provide the foundation for the development of new-generation MEAs, where precise control over the position and force of an electrode would allow dynamic interaction with electrogenic cells. This would open the door for new applications such as simultaneous intracellular recording and drug delivery at the single-cell level.