The colonization of a 3D engineered scaffold is investigated, in the perspective of producing realistic 3D environments for cell culture 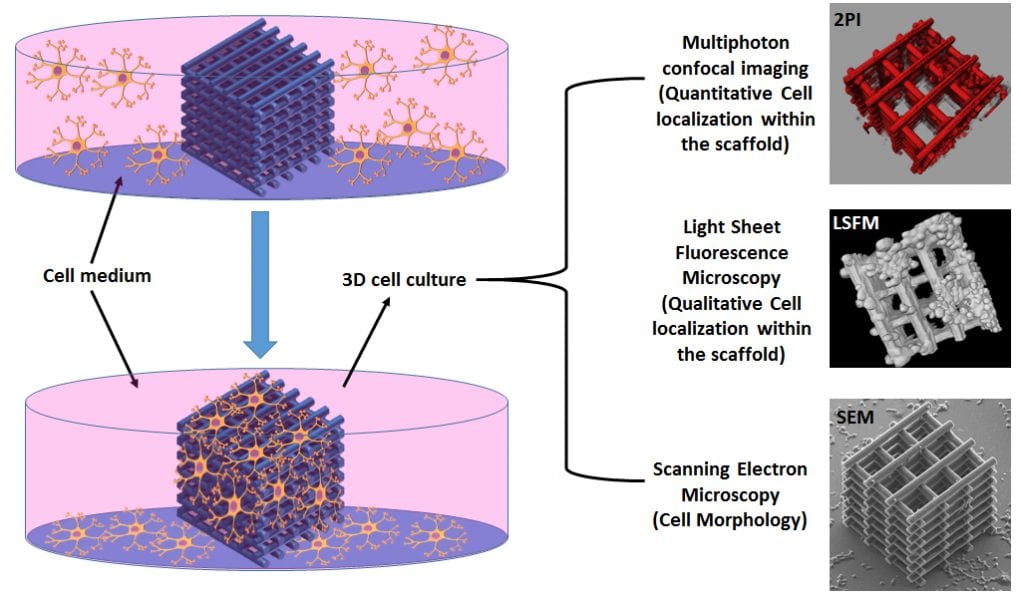 In the human body, cells are arranged in complex three dimensional (3D) architectures. However, this complexity is not reflected in current in vitro cell culture methods and instead most cell culture is implemented on unrealistic plane two dimensional (2D) surfaces. The transition from cell monolayers to 3D cultures is thus motivated by the need to work with cellular models that mimic the features of natural tissues and potential employ such engineered tools as bio-implants to repair damaged areas of the body. There is therefore the urgent need to develop high-resolution 3D fabrication approaches and 3D imaging protocols able both to favor ideal cell proliferation features and to provide a clear scenario of the cell colonization mechanisms.

In a recent Full Paper published in Small, by Angelo Accardo and co-workers, taking profit of advanced 3D microfabrication/imaging protocols, the colonization of a 3D engineered scaffold is investigated, in the perspective of producing realistic 3D environments for cell culture. The high accuracy of the employed direct-laser-writing (DLW) process (≈ 200 nm) provides a much finer control of the micro and nanoscale features compared to other 3D fabrication technologies such as fused deposition modeling, inkjet printing, selective laser sintering or polyjet technology. 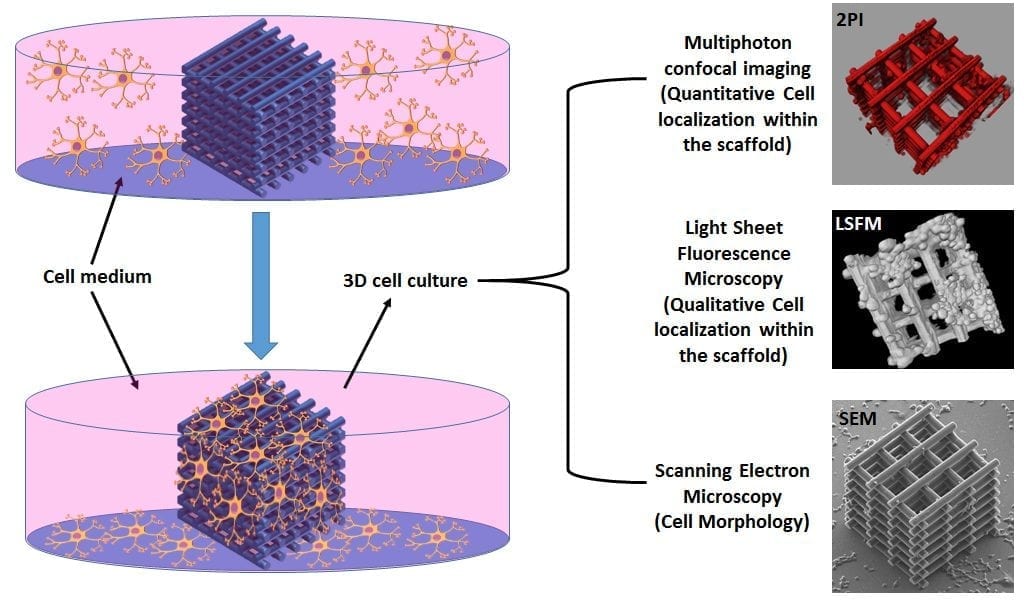 In order to assess the efficiency of the 3D architecture in terms of cell invasion, fast growing neuroblastoma (N2A) cells, known to express several properties of neurons such as the formation of neuritic extensions, are used. For unveiling the localization and the morphology of the cells not only around the 3D scaffold, but also within the scaffold’s core, conventional scanning electron microscopy (SEM) characterization was associated with light sheet fluorescence microscopy (LSFM) and two-photon confocal imaging (2PI), which enabled “light to shine” in the most inaccessible regions of the architecture. The high-resolution imaging analysis revealed an optimal colonization of both the external shell and the inner core of the scaffold with the formation of long (≈ 60 μm) neuritic extensions especially around the nano-features induced by the DLW fabrication.

The developed 3D fabrication/3D imaging protocols open up a broad range of neuroscientific applications, specifically in the field of neural tissue engineering, and for evaluating the action of neurodegenerative peptides on neural networks in 3D in vitro environments.

This article was kindly provided by the Authors of the original manuscript published in Small, and was edited by Jodie Haigh.