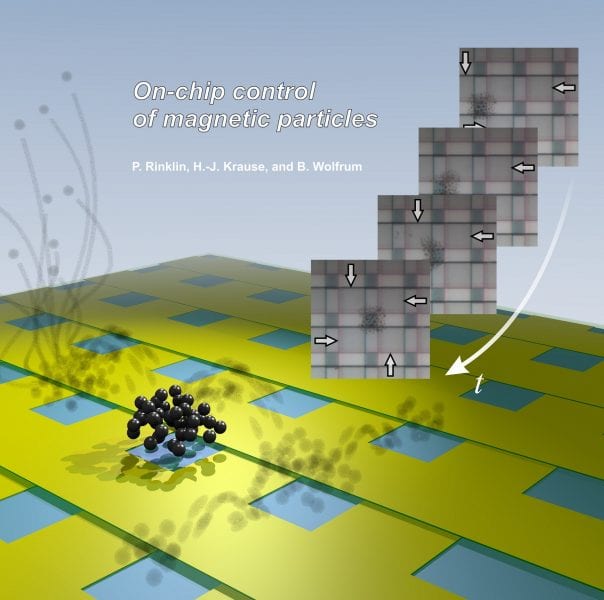 Over the past decades, the possibilities to control the dimensions, magnetic properties and surface chemistry of magnetic micro- and nanoparticles, and thus their field of application, have been widely explored. Currently, magnetic micro- and nanoparticles are applied in various fields, such as magnetically assisted bioassays, contrast enhancement in magnetic resonance imaging, cancer treatment via magnetic hyperthermia, or as versatile tools for labeling, actuation and separation on the micron- and submicron-scale. 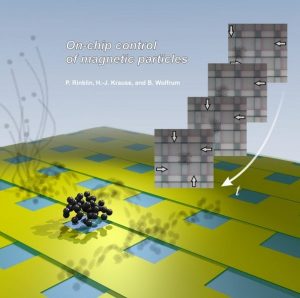 When exposed to a non-uniform magnetic field, these particles are attracted by regions of high field strength. To precisely control the collection and movement of these particles, actuation systems, such as magnetic tweezers, create highly localized field maxima to attract and move magnetic beads on the micro- and nano-scale. Although offering very precise and versatile means to handle magnetic particles, these systems are usually not applicable in lab-on-a-chip systems, as they involve relatively large setups and external magnets.

In order to circumvent these drawbacks, several approaches have recently been taken (e.g. micro- and nano-structured magnetic materials). A different approach makes use of photo- or soft lithographically patterned conduits to generate localized magnetic fields. By controlling the current passed through these channels, the magnetic field induced at the chip’s surface can be designed in various ways. A chip with crossed arrays of such channels allows manipulation of the field in 2D over the surface of the chip.

Rinklin et al. of Forschungszentrum Juelich GmbH now examine the application of different current protocols when controlling magnetic particle clouds on microwire crossbar chips. They show that the current pattern applied to the wires affects the efficiency, as well as the velocity, with which the particles can be moved on the chip and present a simple protocol to move the cloud with >97% efficiency at comparably high transport velocities (the video below shows more details). Future applications of this work could involve functionalization of the particles in order to deliver pharmaceuticals, nucleic acids or proteins to single cells cultured on chips.

This article is part of the forthcoming special issue ‘Engineering of Functional Interfaces’, guest-edited by Achim Walter Hassel, to be published in the June 2012 issue of pss (a).