Modern chemical designers are often inspired by Nature as well as by man-made objects - think of the classical analogy between molecular building blocks and LEGO bricks, the lock and key principle, etc. This year’s chemistry Nobel laureates have certainly been inspired by a bit of both. 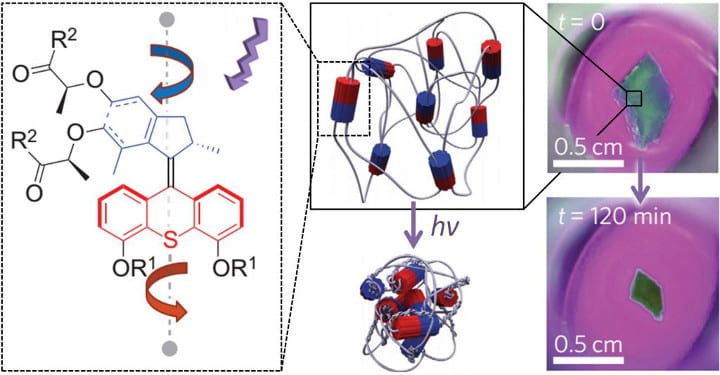 Modern chemical designers are often inspired by nature as well as by man-made objects – think of the classical analogy between molecular building blocks and LEGO bricks, the lock and key principle, etc. This year’s chemistry Nobel laureates have certainly been inspired by a bit of both. Long before being developed by mankind, machines were already operating at the nanoscale in living organisms – for example the ATP-fuelled kinesin/myosin proteins (responsible for intracellular trafficking, cell division, and muscle contraction) or the proton-powered ATP synthase.

Jean-Pierre Sauvage, J. Fraser Stoddart and Bernard L. Feringa initiated in the 80s/90s the development of molecular machines based on catenanes, rotaxanes, and unidirectional light-fuelled motors, a work that required not only imagination but also vision. Over the years it became clear that those objects would develop into something broader than scientific challenges. Defined as systems performing a specific chemical or physical task as a response to chemical/physical inputs (the fuel), artificial molecular machines can operate in two different modes: in parallel (each machine acting independently) or in series (the machines acting in concert, ideally in a cooperative fashion).

An example for the work in parallel would be a catalyst based on one of these machines. By applying external stimuli and operating the machine, one could control where and when a chemical reaction takes place, the sequence of events (Science, 2013, 339, 189), or what the outcome of the reaction should be (R vs. S (Science 2011, 331, 1429-1432), isotactic vs. syndiotactic, etc). In such scenarios, each machine performs on its own without affecting the work of one another. 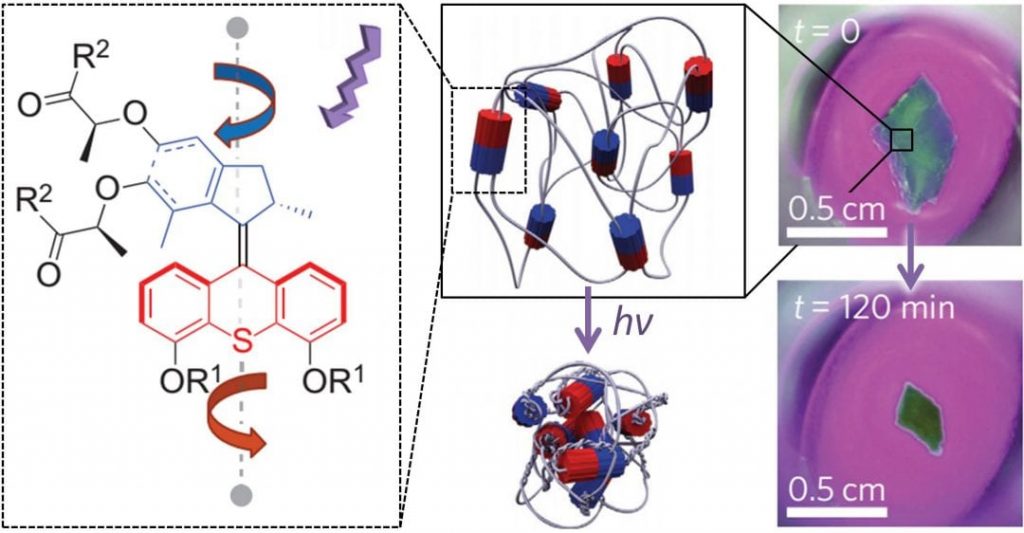 For operating in series though, molecular machines need to be coupled (either covalently or via supramolecular interactions). In other words, they need to be incorporated into polymeric materials. Molecular motors/switches can be integrated at different strategic locations inside polymers. When introduced into the backbone, they may give rise to strands able to reversibly stretch/extend on demand via light (ACS Nano, 2014, 8, 11987) or pH modulation (Angew. Chem. Ed. Int., 2012, 50, 12504), like single-chain muscles. Those chains should eventually be further bundled together (Angew. Chem. Ed. Int., 2016, 2, 703) and connected to other objects to deliver actual work. When motors/switches are implemented as cross-linkers in gels or liquid crystalline networks, they can give rise to materials able to store light energy (Nat. Nanotechnol., 2015, 10, 161) (see Figure) or convert sunlight into continuous motion (Nat. Comun., 2016, 7, 11975) (possibly leading to self-cleaning surfaces). Such materials do not only store/convert light energy, but also change stiffness upon photo-irradiation, a property that could be useful for biomaterials in order to differentiate cellular behaviour on demand (Nat. Rev. Mater., 2016, 1, 15012).

Linear polymers can also act as tracks for motors to move along the strands (molecular walkers), or as scaffolds to align molecular machines (which could then perform a task along the chain, like an assembly line).

These few selected examples highlight how molecular machines benefit from, but also do and will impact polymer science, either to gain exquisite control over the synthesis of macromolecules, or to create all sort of stimuli-responsive (eventually adaptive) materials. Potential applications in this area as well as in life sciences are truly enormous, and no doubt that many researchers in the field have been inspired by the three molecular engineers who have been awarded this year.

About the Author: David Bléger studied at the chemical science and engineering school CPE-Lyon in France, and later on at the Université Pierre et Marie Curie (Laboratory of Polymer Chemistry) in Paris, where he completed his Ph.D. work on the self-assembly of molecular building blocks at metal surfaces in 2008. He then moved to Germany to work as a postdoctoral researcher with Stefan Hecht (2009–2012), and since 2013 he has been an independent group leader at the Humboldt Universität zu Berlin. His scientific interests include molecular and materials science,

with the development of novel photodynamic systems as a primary guideline. You can read his recent Talent Article on Orchestrating Molecular Motion with Light – From Single (macro)Molecules to Materials in Macromolecular Chemistry and Physics.