Several devices using flexible circuit boards were created to demonstrate the possibilities of this technology, showing the ability to create thermoplastic electronic devices. 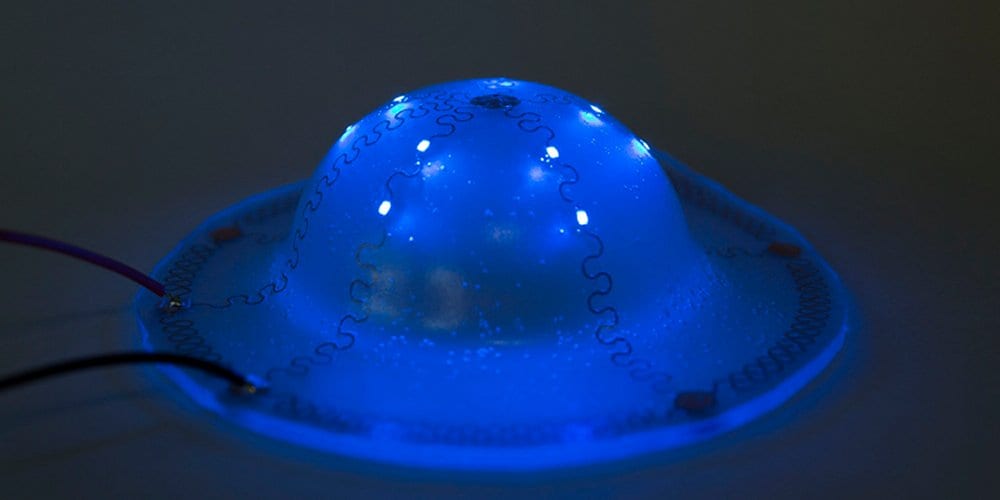 Many recent advances in lifestyle and technology largely depend on blending intelligent devices into the user’s environment; avoiding the hassles normally associated with electronic devices such as cables and tens of buttons. This tends to require complex bulky electronic circuits – in the form of large unattractive cumbersome plastic bricks – which designers attempt to conceal. In a way this often limits the possibilities for user interaction, leading to frustrations for designers, engineers, and consumers alike. Ideally the electronics should be able to follow the shape of the device, giving the designers and engineers the freedom to develop the device the user needs; not the device that will fit the circuit board.

The recent generation of flexible circuit boards already gave some opportunity to achieve this, but they tend to show rather severe limitations. For example they’re difficult to handle during device assembly, and require over-designed attachment structures if reliability is a concern. Some of these problems were solved by flex-rigid circuit boards, but at a large expense during manufacturing. As a result many devices to this day still use rigid circuit boards.

At the same time producing the shell of these consumer devices typically uses thermoplastics, materials which can be deformed by heating them and forming them into a specific shape. Many methods exist to fabricate such a plastic shell; the one considered here is thermoforming. It works by forcing a hot plastic sheet against a mold with the desired shape. It is an economically attractive process due to its simplicity, capability to scale from low to high volume, and low setup cost. Sadly it is unable to create the shapes required to attach a rigid flat circuit board, making it a lot less attractive to electronics manufacturers.

As shown by Bart Plovie and Jan Vanfleteren et al. from Ghent University, flexible circuit boards, which are made from a thin polymer film (< 0.1 mm) covered by an even thinner metal layer, offer an opportunity to solve this problem. Much like a sheet of paper it’s possible to cut these flexible circuit boards into a shape which allows them to follow complex shapes, something demonstrated on a daily basis by origami artists. Given the right shape spring-like properties can be imparted on a material that doesn’t stretch or compress very well, using this technique we can make electronic circuits which are able to stretch and deform as necessary. This was done before to make elastic circuits, leading to the concept of stretchable electronics. The stretchable electronic circuit can follow the shape given to the plastic device shell during the thermoforming process, removing the need for the rigid circuit board altogether. To achieve this, the flexible circuit board is pressed between sheets of plastic and protected by a thermoplastic elastomer – a rubber like material. This stack of materials is then thermoformed into its final shape, creating a thermoplastic electronic device.

Several devices were created to demonstrate the possibilities of this technology, showing the ability to create thermoplastic electronic devices. These devices were given a variety of shapes, ranging from a simple half sphere to an interactive mask covering a person’s face.