The new design of an air classifier allows a fineness range from 200 μm to 2 μm. 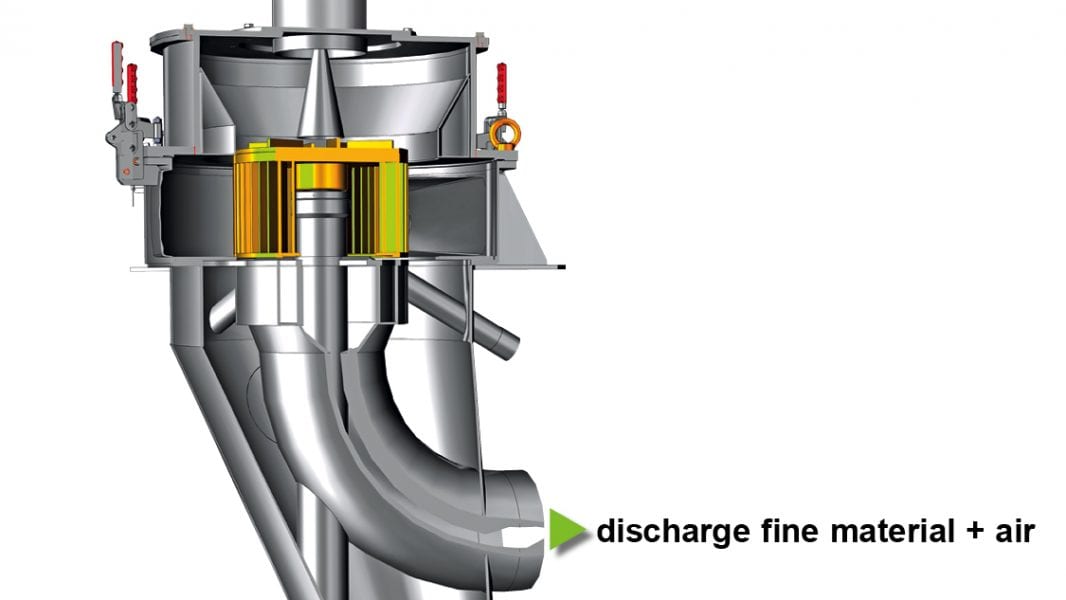 An important feature of plastics is that their properties such as formability, hardness, elasticity, and strength, or temperature resistance can be adjusted with the aid of filling materials. The particle size distribution of a filling material is a decisive factor for the properties of a plastic. A precisely defined particle size distribution is achieved by grinding and subsequent separation, the so-called classification.

The initial layout of the Neuman & Esser air classifier GRC (Guide Ring Classifier) was designed for the classification of roughly 200 μm to 20 μm particles. Depending on the classifier size, throughputs of several tons per hour for medium fineness are possible. For classification in the higher fineness range, throughput is reduced to several hundred kilograms per hour because the number of particles to classify increases exponentially. 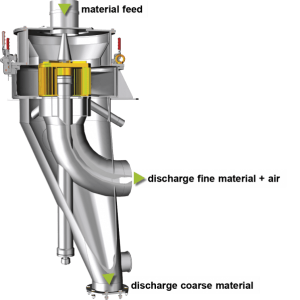 The air classifier divides the feed material into fine material on one side and coarse material on the other side. Source: Neuman & Esser

After passing the classifier wheel the fines leave the classifier housing directly beneath the classifier heading for the downstream filter where the finished product is being discharged from the system. The rejected fraction drops to the bottom of the housing and leaves it via a discharge airlock.

In order to improve the already existing high performance, Neuman & Esser has now made several improvements to the GRC air classifier. The experts focused on how to dispersing fine and coarse in the feed material and on efficiently guiding the material through the GRC classification process.

The new GRC design features now a distribution cone in the inlet of the feed material above a significantly redesigned dispersing unit. After sliding down the cone and passing the dispersion zone, the material reaches the known ring gap. In contrast to the former design now a virtuously engineered guide vane ring handles the transportation into the direction of the classification zone. 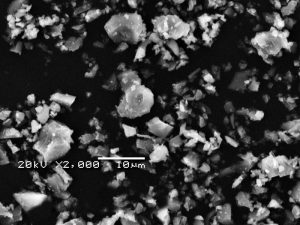 Extensive and detailed testing revealed an unexpected magnitude of improvements not only in yield, throughput and energy consumption but also in the range of achievable fineness, as the company told. The new design now allows widening the possible fineness range from 200 μm to 2 μm.

Computational electromagnetics: Know your tools for they shape our future
Microrobots against harmful polymers in water bodies
How can bioinspired nanofibers regenerate skin and aid wound healing?
Protein Biohybrids as a Toolkit for New Materials