Writing data with an X-ray laser 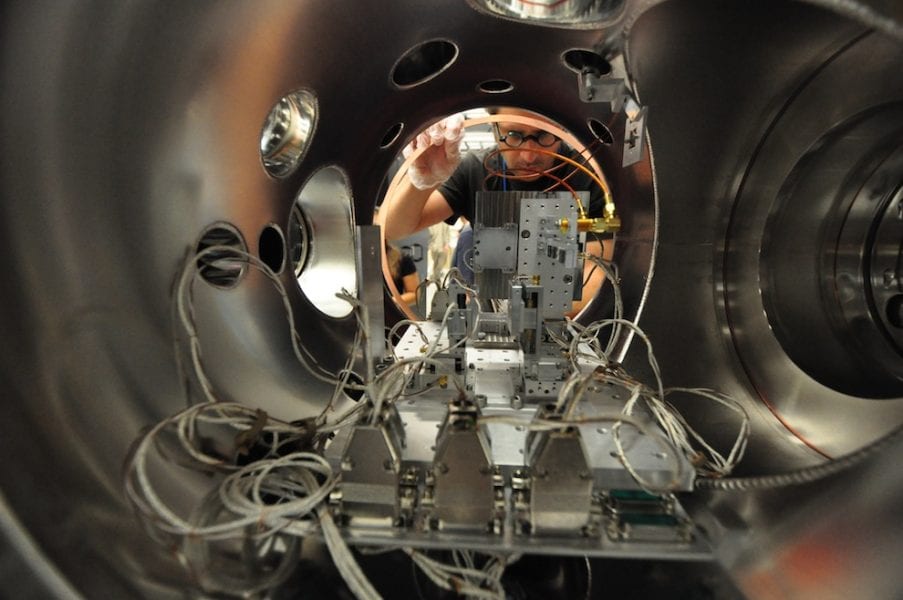 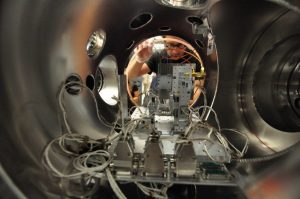 A look inside the RCI sample chamber while researchers close up the chamber for vacuum for an experiment at LCLS. Image: Diling Zhu/SLAC.

Now experiments with SLAC’s Linac Coherent Light Source (LCLS) X-ray laser have given scientists their first detailed look at how light controls the first trillionth of a second of this process, known as all-optical magnetic switching.

The experiments show that the optically induced switching of the magnetic regions begins much faster than conventional switching and proceeds in a more complex way than scientists had thought – a level of detail long sought by the data storage industry, which is eager to learn more about the key drivers of optical switching. The new insight could help guide efforts to engineer materials that better control and speed this process.

“This is really one of the first examples of new materials science that can be done with LCLS, which allows you to look at very short time scales and very small length scales,” said Hermann Dürr, a staff scientist for the Stanford Institute for Materials and Energy Sciences (SIMES) and a principal investigator of the multinational team that performed the experiment, detailed in Nature Materials. SIMES is a joint institute of SLAC and Stanford.

The experiments were performed on tiny samples of a metallic alloy containing iron, cobalt and gadolinium, a combination singled out years ago by the data storage industry for its unique magnetic properties.

In magnetic storage devices, information is stored and retrieved by quickly flipping the orientations of electrons’ spin – which have two possible directions, similar to the poles of a magnet – to produce the equivalent of “ones” and “zeroes.” In conventional devices this is done by applying an electrical current or magnetic field. But the hope is that light can make the switch faster, and thus speed computing.

In the LCLS experiments, scientists started the switching process by hitting a sample with ultrafast pulses of visible light. Then they hit the same sample with a carefully timed pulse from the LCLS X-ray laser, and used a technique called X-ray scattering to probe the evolution of the switching process during the first trillionth of a second. This revealed previously unknown activity at the near-atomic scale of the magnetic regions.

The results showed that the optical laser flipped the magnetic state of the material up to 1,000 times faster, as well as more efficiently, than magnetic switching used in current commercial devices.

The experiments also revealed that the elements within the sample were distributed less uniformly at the nanoscale than previously believed, and that this strongly affected the switching process.

The sample was found to contain tiny regions that were rich in iron or gadolinium. In the instant following the optical laser pulse, the electron spins of the two types of regions began to interact and align. This “spin current” flowed most actively from iron-rich to smaller gadolinium-rich areas, which appeared to serve as localized “traps” for transferring and switching spins.

“People are trying to understand how laser light interacts with spins on these ultrafast timescales in magnetic materials,” said Catherine Graves, a graduate student in the Department of Applied Physics at Stanford University who was a lead author of the research paper. “If you can understand why these areas are acting as spin traps – what’s happening microscopically – you can design that into a material.”

The varied landscape of the material at the nanoscale was unexpected, Graves added: “Nobody thought they would see this variation in the material” or realized it would greatly impact the optical switching process.

The team of researchers is planning follow-up LCLS experiments using faster detectors and a variety of samples, with a goal of finding better-optimized materials for optical switching at the nanoscale and better understanding and optimizing the switching process.

“There is still so much to learn about ultrafast magnetic processes,” said Alexander Reid, a SIMES research associate and another lead author of the research paper. “People are still trying to understand the mechanisms. This gives us a very nice piece of the puzzle.”