Viable electron acceptors based on non-fullerenes

A non-fullerene material is presented as a potential electron acceptor for use in bulk heterojunction organic photovoltaics. 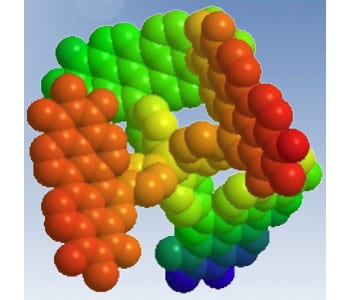 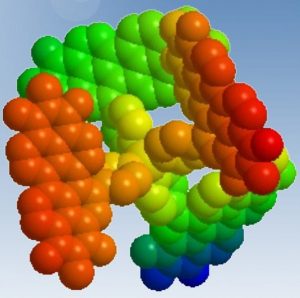 A three-dimensional representation of the electron acceptor “tetra-PDI”

Electron donor–acceptor bulk heterojunction (BHJ) devices are a popular area of current research in organic photovoltaics (OPVs). Over other OPVs, such devices are lightweight, cheap to manufacture, and flexible. Fullerenes are widely used as electron acceptors in BHJ devices, but such acceptors are weakly absorbing in the visible light region, have poor chemical and electronic tunability, and are expensive to produce. As such, research has recently investigated non-fullerene materials as an alternative acceptor. In their recent work, which features in the newest issue of Advanced Science, Hong-Zheng Chen, Alex Jen, and co-workers report a 3D, silicon-cored, non-fullerene acceptor based on perylene diimides (PDIs).

Nonplanar non-fullerene acceptors have previously been shown to have superior performance over their planar analogs in OPVs. The 3D acceptor reported here uses a Suzuki coupling reaction to gather four PDI units into a small space; the authors refer to the molecule as “tetra-PDI”. The PDI units are interlocked and non-rotatable, making tetra-PDI different to other non-planar acceptors. Density functional theory (DFT) calculations predict that the molecule can mimic the π-surface exposure and electron affinity of fullerene derivatives. Optical and electrochemical studies suggest tetra-PDI can suppress self-aggregation, which is commonly observed in planar PDIs, thus improving the charge separation and electron transfer properties that are beneficial for use in a BHJ device.

In order to test this potential BHJ OPV suitability further, the authors use a commercially available donor known as PBDTT-F-TT, which has a complementary absorption spectrum and frontier energy levels to tetra-PDI. The optimized donor:acceptor blend ratio is found to be 1:1.2, which gives a power conversion efficiency (PCE) of 3.21%. By comparison, a similarly fabricated BHJ using mono-PDI instead of tetra-PDI gives a PCE of just 0.63%. Using the processing additive 1-chloronaphthalene improved the PCE of the tetra-PDI-based device to 3.54%.

The work demonstrated by the authors is an important development in research into solution-processed BHJ OPVs. It is a proof of concept for a design of a 3D electron acceptor that can avoid the pitfalls of fullerene materials. These findings could be the start of an exciting new chapter in the field of OPVs.