Using Water and Air to Develop Plasma Activities and Applications 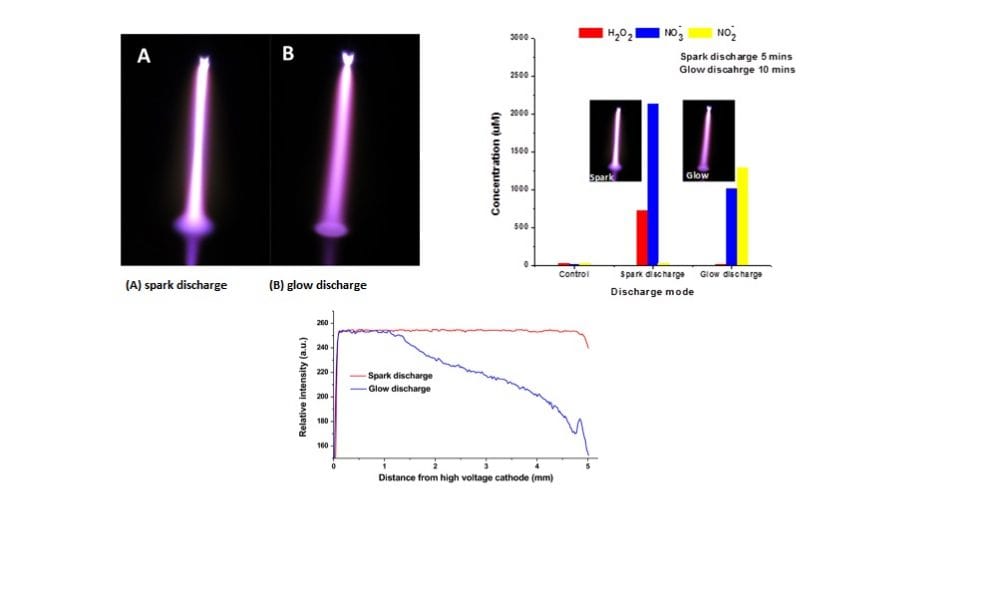 Non-thermal plasma can provide a rich source of radicals which make it a promising approach for efficient sterilization and decontamination. An emerging means of harnessing the reactive species from non-thermal plasma is through generation of plasma activated liquids (PALs). A number of recent publications have reported on the antimicrobial and cytotoxic activities of PALs such as plasma-activated water or plasma-activated culture media: this approach expands the modes of application and dosage control with potential for in vivo application for wound or cancer treatment in addition to surface decontamination of abiotic surfaces or biotic surfaces such as tissue or food products. The long-term antimicrobial stability of the PALs could provide the advantages of off-site production, storability, and flexibility of application over the direct treatment.

Oxygen bubbles around the anode rode during glow discharge

Employing air as the plasma working gas confers many advantages for ease, cost, and flexibility of use. In a study published in Plasma Processes and Polymers the reactive species specificity in water using air was presented by researchers from the Plasma Research Group of the Dublin Institute of Technology, Ireland. The reactive species were tailored by means of treating water with simple AC spark and glow discharges to open air. Two types of air discharge in contact with water were performed and the corresponding reactive species inside two kinds of PAW were analyzed and compared in terms of stable species

. The tailored reactive species specificity produced in this study using water and air, can serve as a platform to enhance mechanistic understanding of cellular and target interactions with species specific PAL. The selective generation of species using water and air will also facilitate targeted applications of cold PAL to various fields including food processing, plasma agriculture, antimicrobial development, and cancer therapies, where the roles of different key reactive species is emerging. Thirdly, the tailored specificity reported here can provide richer parametric spaces for PAL products by combining different discharge modes or mixing different types of PALs.