Using brain scans to personalize the treatment of depression

Taking advantage of progress made in neuroimaging, researchers hope that personalized treatments for mental disorders using brain stimulation therapies will be the way forward. 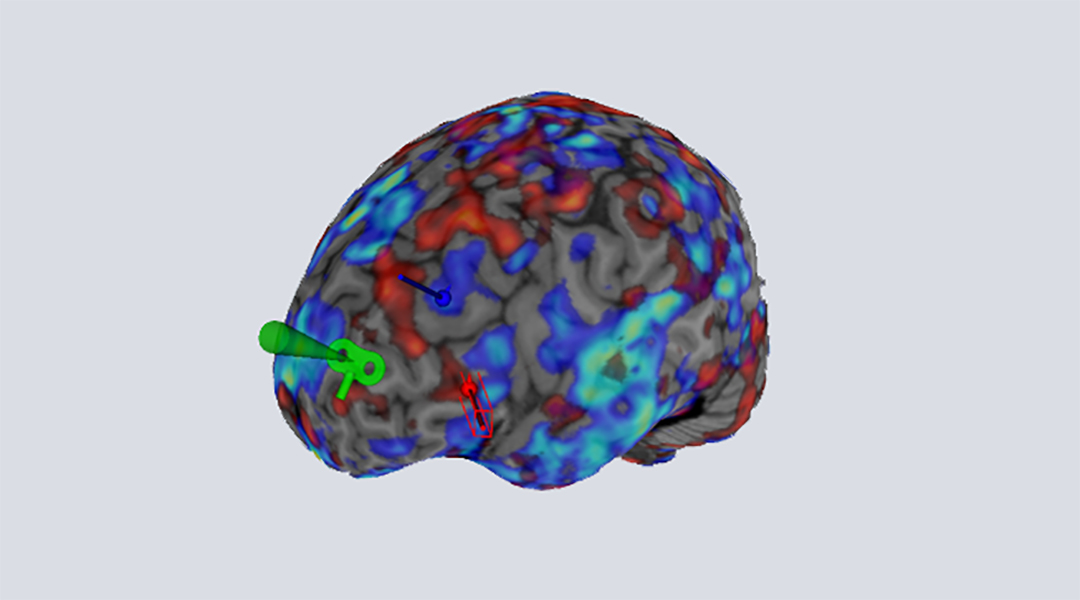 With an estimated 120 million people affected worldwide, depression is the most commonly diagnosed psychiatric disorder among adults. Treatments such as psychotherapies (talk therapy), anti-depressant medications, and even electroconvulsive (shock) therapy are available and effective to some degree, but do not work for a significant number of patients. In addition, these treatments are often associated with mild to severe side effects such as fatigue, nausea, loss of appetite, loss of sexual interest, or insomnia.

Improving treatment outcome and developing new tools to add to the therapeutic arsenal against depression is therefore fundamental.

Repetitive transcranial magnetic stimulation — often abbreviated as rTMS — is a technique that allows researchers to artificially and non-invasively stimulate the human brain. A coil, usually in the shape of a figure eight, is used to generate pulsing magnetic fields, which produce a perpendicular electric field that when directed at the brain, can change the activity of the targeted region.

This spurred researchers to thinking: Could this technique be used to treat psychiatric problems like depression?

One brain region, the dorsolateral prefrontal cortex (DLPFC), which is involved in emotion regulation, consistently appears to be under active in depressed patients. Stimulating this region with rTMS could potentially restore “normal” activity and help affected patients. Clinical and research studies have actually shown that rTMS treatment over this region alleviates depressive symptoms in up to 30% of patients. While 30% might not seem an impressive response for rTMS, it is on par with standard antidepressant medications with the added benefit of minor to no unwanted side effects.

Exploring possibilities to make rTMS even more effective is highly important, as many patients already benefit from this type of treatment when other routes, such as medication or psychotherapy, fail to be fully effective.

As neuroscience progresses, our understanding of mood disorders is advancing. Rather than relying solely on the subjective reports of symptoms for diagnosis, neuroscientists are looking directly at the brain for answers.

Neuroimaging studies that have included tens of thousands of patients with depression have implemented machine learning algorithms to identify common brain signatures to produce objective and brain-based classifications of patients. These methods have revealed the existence of different subtypes of depression, each with their own specific impairments and brain activity abnormalities. This is crucial information: if depressed patients can exhibit different brain impairments, then blanket or even targeted therapies, such as stimulating the DLPFC, will not help them all. Individualizing treatment could drastically increase clinical effectiveness.

This challenge is addressable to some degree by combining rTMS and neuroimaging techniques such as functional magnetic resonance imaging (or fMRI) in which brain activity is indirectly observed by measuring blood oxygenation and flow. As a brain region is activated, its demand for oxygen increases, which is provided through increased blood flow to that area. However, combining rTMS and fMRI is not an easy task as both rely on strong magnetic fields to work and would interfere with one another. In the same way that a magnet interacts with another magnet, using an rTMS device in an fMRI scanner without precautions would lead to unwanted interactions that could render data unusable.

In a recent study published in WIREs Cognitive Science, Dr. Desmond Oathes and colleagues from the University of Pennsylvania report on current methods to overcome this challenge.

One simple solution is to use the two techniques separately so as not to combine them and cause interference. For example, researchers can use fMRI and rTMS sequentially to observe brain activity before and after treatment. These kinds of studies have already been conducted and have led to significant advances in our understanding of rTMS treatment mechanisms. Most notably researchers have realized that the activity of the targeted regions before treatment with rTMS could predict whether it would be successful.

Applying rTMS to brain regions that have known synchronized activity with an area of the brain called the subgenual anterior cingulate cortex (sgACC) led to better treatment outcomes. This is interesting as the sgACC plays an important role in regulating emotion and is also affected in depression. This finding suggests that the effects of rTMS may not be limited to the just the targeted region. After all, this makes sense as the brain is a highly complex electrochemical network and stimulation at one location will propagate changes to distant interconnected regions. Selecting brain targets synchronized with the sgACC in each patient could thus improve treatment response.

To confirm this, rTMS treatment needs to be carried out within an MRI scanner as it is acquiring brain activity images. This allows clinicians to observe the immediate and lasting effects of stimulations on the targets and connected regions, such as the sgACC. Short rounds of rTMS within the scanner can be used to understand how the electrical stimulation propagates to the sgACC and modifies its activity. This allows researchers to quickly identify the optimal target for treatment in each patient based on their ability to change the activity of the sgACC or other relevant regions implicated in depression and anxiety.

This method, while challenging, is already routinely used at the Center for Neuromodulation in Depression and Stress at the University of Pennsylvania and made possible using new MRI compatible rTMS coils. They utilize low ferro-magnetic components that would otherwise cause artifacts in the brain images.

Patients first undergo fMRI scanning to tailor the rTMS brain target to their own brain activity and then receive rTMS in and outside the scanner to observe the efficacy of the personalized targets.

New methodologies are also being developed to further increase treatment individualization. Given the advances in the field of real-time neurofeedback in providing visual representation of a participant’s brain activation and machine learning, it is now conceivable to measure real-time brain activity and adapt rTMS stimulation parameters such as frequency or length to optimize a brain target response.

Combining rTMS with neuroimaging is key on our path to further improve treatment efficacy. In addition, the field of brain stimulation is booming and other techniques, such as transcranial direct current stimulation (tDCS) or focused ultrasound are becoming more and more available. Each of these techniques can be combined with fMRI or other forms of neuroimaging to provide more detailed and crucial information for improved therapeutic options.

Neuromodulation techniques will have an important role to play in the treatment of mood disorders and innovative study designs are needed for them to reach their full potential.

Yanglong Hou: A Leader in Multidisciplinary Research
A smart microneedle patch to monitor and manage diabetes
Measuring computers' carbon footprint with "Green Algorithms"
What's on the table at COP26?