Berkeley Lab-led research could guide the development of bacteria-resistant materials. 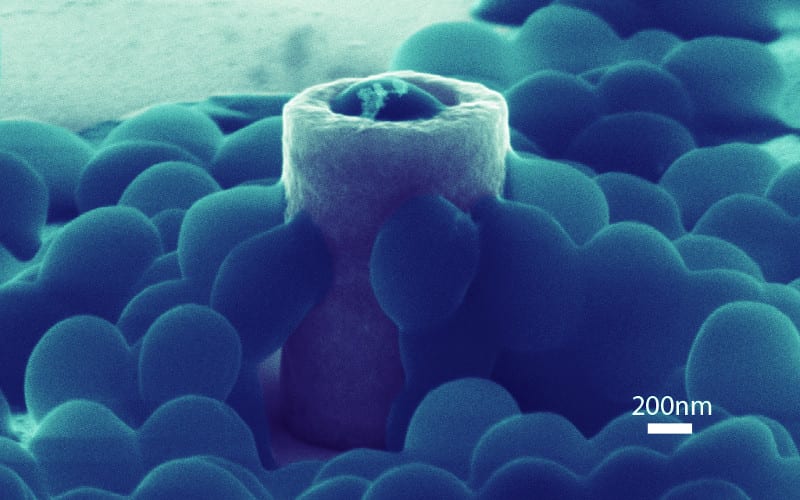 This scanning electron microscopy image reveals how Staphylococcus Aureus cells physically interact with a nanostructure. A bacterial cell (blue) is embedded inside the hollow nanopillar’s hole and several cells cling to the nanopillar’s curved walls. Image: Mofrad lab and the Nanomechanics Research Institute.

The bacterium Staphylococcus Aureus (S. aureus) is a common source of infections that occur after surgeries involving prosthetic joints and artificial heart valves. The grape-shaped microorganism adheres to medical equipment, and if it gets inside the body, it can cause a serious and even life-threatening illness called a Staph infection. The recent discovery of drug-resistant strains of S. aureus makes matters even worse.

A Staph infection can’t start unless Staphylococcus cells first cling to a surface, however, which is why scientists are hard at work exploring bacteria-resistant materials as a line of defense.

This research has now gone nanoscale, thanks to a team of researchers led by Berkeley Lab scientists. They investigated, for the first time, how individual S. aureus cells glom onto metallic nanostructures of various shapes and sizes that are not much bigger than the cells themselves.

They found that bacterial adhesion and survival rates vary depending on the nanostructure’s shape. Their work could lead to a more nuanced understanding of what makes a surface less inviting to bacteria. 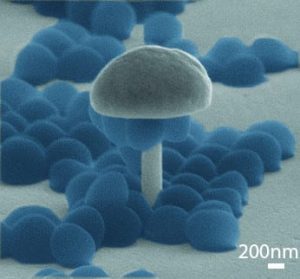 “By understanding the preferences of bacteria during adhesion, medical implant devices can be fabricated to contain surface features immune to bacteria adhesion, without the requirement of any chemical modifications,” says Mohammad Mofrad, a faculty scientist in Berkeley Lab’s Physical Biosciences Division and a professor of Bioengineering and Mechanical Engineering at UC Berkeley.

Mofrad conducted the research with the Physical Biosciences Division’s Zeinab Jahed, the lead author of the study and a graduate student in Mofrad’s UC Berkeley Molecular Cell Biomechanics Laboratory, in collaboration with scientists from Canada’s University of Waterloo.

Their research was recently published online in the journal Biomaterials.

They introduced S. aureus cells to these structures, gave the cells time to stick, and then rinsed the structures with deionized water to remove all but the most solidly bound bacteria.

Scanning electron microscopy revealed which shapes are the most effective at inhibiting bacterial adhesion. The scientists observed higher bacteria survival rates on the tubular-shaped pillars, where individual cells were partially embedded into the holes.

In contrast, pillars with no holes had the lowest survival rates.

The scientists also found that S. aureus cells can adhere to a wide range of surfaces. The cells not only adhere to horizontal surfaces, as expected, but to highly curved features, such as the sidewalls of pillars. The cells can also suspend from the overhangs of mushroom-shaped nanostructures.

“The bacteria seem to sense the nanotopography of the surface and form stronger adhesions on specific nanostructures,” says Jahed.