Uncovering the secrets of cellular organization

A 3D hydrogel model provides key insights into how cells sense and respond to elements of their environment. 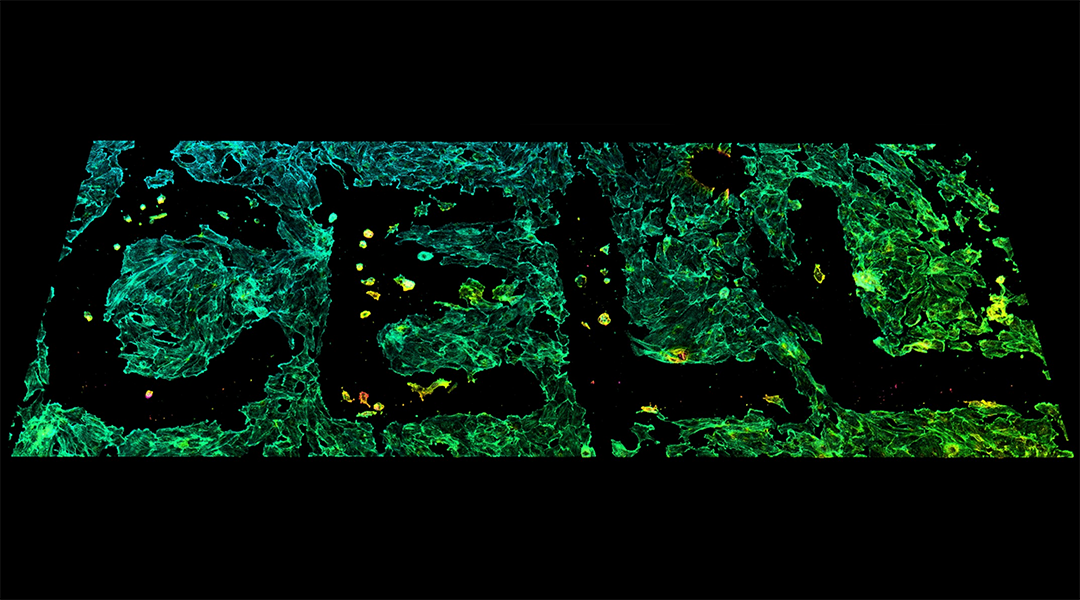 Our cells constantly perform a carefully choreographed dance, arranging themselves into complex tissues. Some cues directing this cellular ballet are known, such as chemical and electrical gradients for example. There now appears to be a more universal set of cues instructing cells: the physical parameters of the environment itself.

Since the invention of agar Petri dishes in the late 19th century, cells have been studied on flat, stiff surfaces, which hardly resemble their natural environment. More recently, cell behavior has been studied in dispersed 3D gels, but never in curved or folded environments.

Now, due to advances in fabrication techniques of soft gelatin hydrogels, a team from John’s Hopkins University, the University of Maryland, and the John’s Hopkins School of Medicine can create specific microscale 3D settings that amount to cell-sized mountains and valleys in which they can observe cellular behavior. In their paper published in Advanced Science, they showed that cells do in fact sense and respond to physical aspects of their surroundings.

“We have discovered that cells can organize by measuring something,” said David Gracias, professor in chemical and biomolecular engineering at John’s Hopkins University and one of the authors of the paper. “It’s kind of like a cellular ruler.”

What they measured is the stiffness and aspect ratio of wells printed into the hydrogel — aspect ratio being the ratio of the well’s perimeter to its depth and stiffness measured in kilopascal (kPa), a unit describing a material’s resistance to being deformed.

The team observed that cells in softer 2 kPa wells were 30 times more likely to organize in a ringed pattern around the edge of the well compared to cells in stiffer 35 kPa wells, which spread out evenly across the well. Furthermore, this behavior was strongly correlated to the well’s aspect ratio. Increase or decrease the ratio too much, and the cells stopped forming the rings.

Importantly, these hydrogels don’t contain chemical signals. “There are no micro patterns or gradients of chemical stimuli that are also affecting the cell behavior,” said co-author Lewis Romer, a physician and professor of anesthesiology and critical care medicine at the John’s Hopkins School of Medicine. “The ligands for cell attachment are homogenously available across the surface.”

This uniform biochemical environment means the cells must be sensing the aspect ratio and stiffness of their environment and using these cues alone to organize. In a fun demonstration of the specificity of this response, the team placed cells on a hydrogel imprinted with letters at the right stiffness and aspect ratio and watched as they formed the word CELL.

It’s easy to see tissue engineering applications, such as the production of organoids — small organ-like structures used for research. But there are more fundamental implications for this work too. Sensing these cues means the cells are using some still undescribed signalling pathway, something the team is eagerly hoping to map out in the future.

The body is also a dynamic 3D environment in which aspect ratio and stiffness change over time. Exactly how cells respond to these parameters might explain how critically important tissues, like the vascular system, develop and respond to aging and disease. “To think that, that process of vascular network formation may be extremely responsive to aspect ratio would help us to guide the kinds of questions we want to ask in a developmental biology context,” said Romer.

Romer’s research also focuses on a group of vascular diseases called pulmonary hypertension. “One of the themes in the development of that kind of vascular disease and others as well, corona artery disease, arterial sclerosis, is this issue of stiffness.”

These diseases, and even aging itself, come with the stiffening of vascular tissues, says Romer, and the discovery of the importance of stiffness and aspect ratio to cellular organization provides intriguing avenues of inquiry and targets for treatment. “It’s a specific kind of target, specific new signalling frontier that can be interrogated.”

Colors of the Anthropocene — The future of green hydrogen
Electronics that Imitate Life: A Sensing Robotic Hand
Printed Electronics: Print Your Own Speakers
Oded Rechavi: “Do anything in your own style, the way you want to do it”