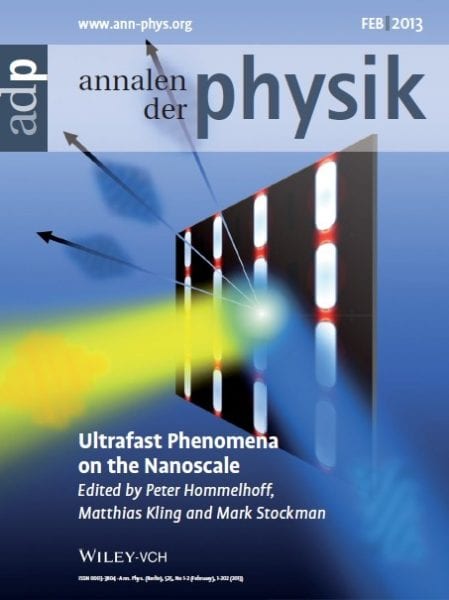 Ultrafast physics and nanoscale research are two emerging scientific fields that mate very well. This merger is currently developing into an independent, fruitful field of research.

Ultrafast physics and nanoscale physics are two highly successful fields of current research. Ultrafast science produces and analyzes events as short as attoseconds. It is often explored through analysis of atoms and molecules, whereas nanoscale research focuses on matter in the solid state form.

Both fields are merged in the latest topical issue of Annalen der Physik. The issue, called “Ultrafast phenomena on the nanoscale”, has been edited by renowned scientists in the corresponding fields: Peter Hommelhoff and Matthias Kling from Max-Planck-Institute of Quantum Optics, Garching, Germany, and Mark I. Stockman from Georgia State University, Department of Physics and Astronomy, Atlanta, USA.

Almost all important electronic processes in solids take place in the sub-femtoseconds to picoseconds time range, whereas intriguing effects related to nanoscale phenomena (for example, the steering of electronic matter waves) take place over nanometer distances. Joining these two fields is only natural, because their intrinsic time and length scales match. In fact, ultrafast phenomena on the nanoscale is currently developing into its own, independent field of research. This fertile encounter can be explored in various directions. For example, ultrafast laser pulses can be utilized to probe electronic behavior in solids, and, vice versa, the electronic response of the optically driven electronic system might lead to new, e.g. nonlinear, effects. The large, and still growing, field of ultrafast plasmonics is currently the most visible offspring of this approach.

The collection of contributions in the special issue reflects the various directions from which the cross-section of “ultrafast and nanometer-small” science can be tackled. For example, F. Faisal, one of the fathers of multiphoton processes in strong laser fields, discusses related effects in the hottest nano-material currently explored: graphene.

In a review article,  J.-Y. Bigot and M. Vomir report on ultrafast magnetization dynamics in nanostructures. Other articles treat the influence of inhomogeneous electric near-field distributions near nanoscale structures on high harmonic generation processes. Here, the decay length of the near field is so small that the trajectories of the electrons involved in the high-harmonic generation process are modified.

Further topics include the investigation of strong-field phenomena in electron emission from a tip array and the study on electron emission mechanisms of ultrashort-pulse-driven tips. Several papers turn the perspective around to study the ultrafast response of near-field, plasmonic, and surface effects. Another collection of articles is devoted to the ultrafast response of artificial atoms, mostly quantum dot structures. Novel techniques are the focus of two articles. One discusses imprinting XUV phase grating on wide-band semiconductors to probe the evolution of free carrier dynamics with the help of a time-delayed infrared pulse; the other shows how highly non-linear effects in a photonic structure can be used to switch light with light.