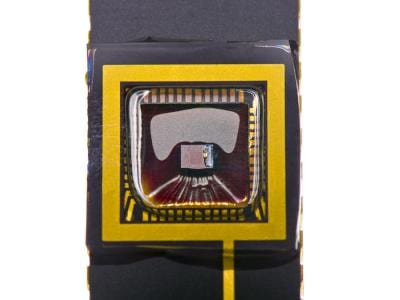 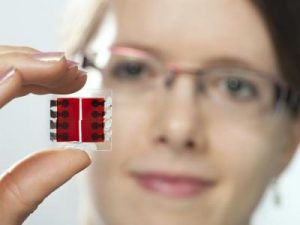 Ultra-thin: Organic sensors can be applied to CMOS chips over large and small surfaces, as well as to glass or flexible plastic films. Image: Photo: U. Benz / TUM.

Image sensors are at the core of every digital camera. Before a snapshot appears on the display, the sensors first convert the light from the lens to electrical signals. The image processor then uses these to create the final photo.

Many compact and cellphone cameras contain silicon-based image sensors produced using CMOS (complementary metal oxide semiconductor) technology. Prof. Paolo Lugli and Dr. Daniela Baierl from TUM have developed a cost-effective process to improve the performance of these CMOS sensors. Their approach revolves around an ultra-thin film made of organic compounds, in other words plastics.

The challenge lay in applying the plastic solution to the surface of the image sensors. The researchers tested spin- and spray-coating methods to apply the plastic in its liquid, solution form as precisely and cost-effectively as possible. They were looking for a smooth plastic film that is no more than a few hundred nanometers thick. Spray-coating was found to be the best method, using either a simple spray gun or a spray robot.

Organic sensors have already proven their worth in tests: They are up to three times more sensitive to light than conventional CMOS sensors, whose electronic components conceal some of the pixels, and therefore the photoactive silicon surface.

Organic sensors can be manufactured without the expensive post-processing step typically required for CMOS sensors, which involves for example applying micro-lenses to increase the amount of captured light. Every part of every single pixel, including the electronics, is sprayed with the liquid polymer solution, giving a surface that is 100 percent light-sensitive. The low noise and high frame rate properties of the organic sensors also make them a good fit for cameras. 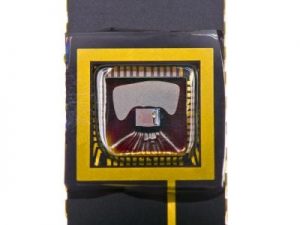 Strong performance: During tests, the organic sensors proved to be up to three times more sensitive to light than conventional CMOS sensors. Image: Photo: A. Heddergott / TUM.

Another advantage of the plastic sensors is that different chemical compounds can be used to capture different parts of the light spectrum. For example, the PCBM and P3HT polymers are ideal for the detection of visible light. Other organic compounds, like squaraine dyes, are sensitive to light in the near-infrared region.”By choosing the right organic compounds, we are able to develop new applications that were too costly up until now,” explains Prof. Paolo Lugli, who holds the Chair of Nanoelectronics at TUM. “The future uses of organic infrared sensors include driver assistance systems for night vision and regular compact and cellphone cameras. Yet, the lack of suitable polymers is the main hurdle.”