A new approach to prevent wound infections: Antimicrobial activities and microbial barrier properties can be designed in a single biopolymer.

Natural defenses against infection combine direct microbial killing with physical attributes, such as the barrier formed by intact skin. When these defenses are compromised by surgery or trauma, there is a need to replace both of these components until healing occurs.

Bevilacqua et al. report a biopolymer that provides dual functionality of both a potent microbicide and effective physical barrier. Designed for local application to exposed tissues, the reported biopolymer, designated K100L40, is amino acid based. It contains water soluble and water insoluble domains composed of a positively-charged segment made of lysine amino acids, and a hydrophobic segment made of leucine amino acids. While having the composition of a simple protein, K100L40 is produced using inexpensive and scalable methods similar to those used to make plastics, rather than traditional peptide solid phase synthesis or protein biosynthetic methods. 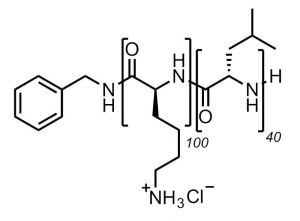 K100L40 was shown to be broadly antimicrobial, with rapid and potent activity against gram-positive and gram-negative bacteria, as well as yeast, including multidrug-resistant (MDR) strains. Notably, activity was demonstrated against S. aureus, methicillin-resistant S. aureus (MRSA), vancomycin-resistant E. faecium, A. baumannii (including MDR), P. aeruginosa (including MDR), carbapenem-resistant Enterobacteriaceae (CRE), and C. albicans (including fluconazole-resistant), all of which cause substantial morbidity and mortality in healthcare settings today.

Driven by the association of water insoluble segments, K100L40 biopolymers form viscous solutions and self-supporting, three dimensional hydrogel networks at low concentrations in water. These physical characteristics of K100L40 preparations provide an effective barrier to microbial contamination, as measured by substantial decreases of tissue-associated bacteria after deliberate inoculation of porcine skin explants. These preparations were also shown to be effective in porcine open wounds and rodent closed wounds containing a foreign implant in vivo.

Based on these findings, synthetic biopolymers with the features of K100L40 were shown to be a promising new approach for prevention of wound infections by combining potent, direct antimicrobial activity and physical barrier properties in a single component material.