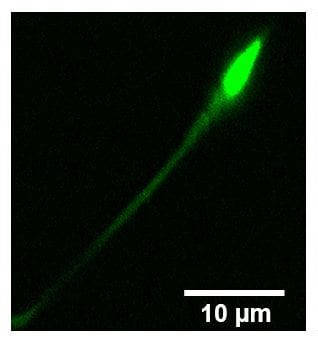 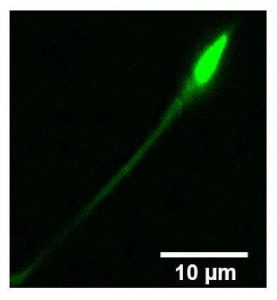 Probe-based confocal laser endomicroscopy (pCLE), a new imaging technique for in situ localization of spermatozoa, might improve the results of testicular sperm extraction while reducing traumata during surgery.

In Central Europe nearly every sixth couple at reproductive age is involuntarily childless, in 50% of cases due to male infertility. In about 10% of all infertile men azoospermia is diagnosed, i.e. no spermatozoa are found in the ejaculate. In this case, testicular sperm extraction (TESE) is performed before starting in vitro fertilization (IVF): spermatozoa are obtained by cutting a minimum of three tissue samples out of the testes. The localization of the biopsies is usually determined arbitrarily. Yet, as sperm is not homogeneously distributed in the tissue, the procedure leads to an extraction of sperm in only about 50% of the patients.

Up to now, there have been no diagnostic options to precisely localize the most suitable areas for sperm extraction in order to obtain a high number of spermatozoa and at the same time to minimize trauma to the patient. All imaging technologies developed so far either lack satisfying molecular or functional contrast or sufficient spatiotemporal resolution. A quite novel biomedical imaging technique could provide the opportunity of non-invasive, real-time visualisation of tissue at histological resolution: probe-based confocal laser endomicroscopy (pCLE). As it uses light in the VIS spectral region, no side effects should occur. However, until now, pCLE has never been used for diagnostic purposes in the male genital tract.

A team led by Matthias Trottmann from the Klinikum Großhadern, University of Munich (Germany) have now performed an ex-vivo study in order to test the feasibility of the pCLE-system for the investigation of ejaculates and testicular tissue. The tissue samples were taken from testes of transsexual patients after surgical removal. They were a perfect model for localizing single spermatozoa in the seminiferous tubules, because the patients had been treated with a long-term medication drastically reducing spermatogenesis.

Using pCLE, the scientists were able to visualize longitudinal and horizontal views of the tubuli seminiferi contorti and to localize vital spermatozoa in the samples. It was clearly visible that the spermatozoa were moving in the tubules. The results could be confirmed by confocal laser scanning microscopy (CLSM).

The most distinct images/movies were achieved using acriflavine, but also the use of fluorescein Alcon or FITC provided good results. The most appropriate probe for identifying the spermatozoa was the probe Pro FlexTM UltraMini O. In the near future the interpretation might be facilitated by staining spermatozoa with a spermspecific FITC labelled antibody.

The study provides evidence of the feasibility and effectivity of pCLE as a new diagnostic tool to discover sperms in the testis environment. The method might help optimizing the results of TESE while less tissue has to be removed during surgery minimizing the trauma and the risk of hypogonadism.