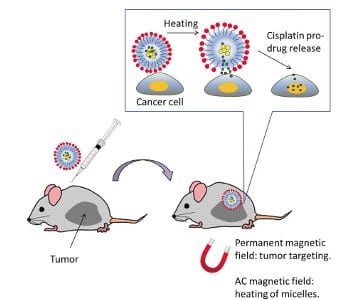 Considering the advances in cancer research and therapy the use of hybrid nanomaterials as cargo carriers with controlled drug release functionality is in the focus of interest.

In this context thermosensitive magnetomicelles are especially promising. These polymeric micelles consist of a hydrophobic core, including magnetic nanoparticles and the drug cargo, and a shell which is hydrophilic in solution below a critical temperature. Applying a magnetic field on the one hand, heats up the micelles above a critical temperature which results in the release of the payload such as cisplatin, a well-known chemotherapy drug. On the other hand, the nanoparticles enable magnetic guiding of the micelles via the external magnetic field directly to the tumor site.

Elena A. Rozhkova and co-workers investigate the interactions between these nanomicelles and a biological system on the subcellular, cellular, and small animal level. In particular, a Pt complex included in the polymeric micelle functions as a pro-drug for cisplatin after it is intracellularly reduced from Pt(IV) to Pt(II) whereas Fe3O4 nanoparticles enable the magnetic guiding of the micelles to the tumor site. Furthermore, the inclusion of a near-infrared fluorescent dye facilitates the visualization in a live animal model.

The researchers successfully visualize for the first time the interface between the nanostructure and a single cell where a focal cisplatin delivery to nuclear DNA occurs with a spatial resolution of 30 nm by means of hard X-ray fluorescence microscopy. The main advantage of this technique is that it enables to quantitate trace amounts of elements in samples due to the enormous sensitivity of the X-ray probe. Therefore it facilitates the analysis of the spatial distribution and the quantification of the platinum drug inside the single cell rather than giving a signal averaged across the entire cell or a large number of cells.

All in all, the use of hybrid magnetomicelles as cargo carriers transporting the platinum complexes through the cell membrane and supporting the controlled drug release inside the cell nucleus is a promising approach which limits chemotherapeutic side-effects and helps to overcome cisplatin resistance related mechanisms associated with changes in cellular uptake.