Camouflage, illusion or cloaking devices, once deeply rooted in science-fiction, can make an object appear “invisible”. A novel technique for thermal illusion meta-devices is reported.

Camouflage, illusion or cloaking devices, once deeply rooted in science-fiction, have the ability to make an object appear “invisible”.

Many traditional camouflage or illusion metamaterial devices produce a camouflage external to the actual device, as if the internal object is “not present” or appear as “something else”. While this method of illusion is suitable for some applications, it has it limitations. 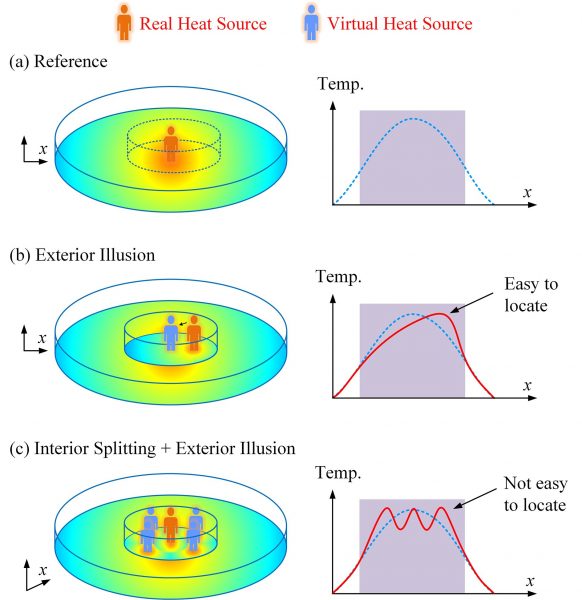 Current illusion techniques cannot change the number of heat signals, nor achieve both internal and external illusions at the same time.

Researchers, Professor Xiaobing Luo and Professor Cheng-Wei Qiu state that, “We have made a thermal illusion device, with split multi-location illusions for enhanced camouflaging and deceptiveness in infrared detection.”

Their technique identically mimics the external thermal behavior of an equivalent reference and splits the interior original heat source into various virtual signals sitting in various locations, see Part c) of the Figure.

The temperature profile inside the meta-device can misrepresent the real location, shape, size and number of the actual heat sources, while the profile on the outside can maintain the perfect camouflage.

The next challenge is to create more separated thermal illusions to make the illusion performance better and more deceptive and misleading.