An unexpected finding in the heart of the NGC 3182 galaxy led to an intriguing search for the origins of a ring of star-forming gas. 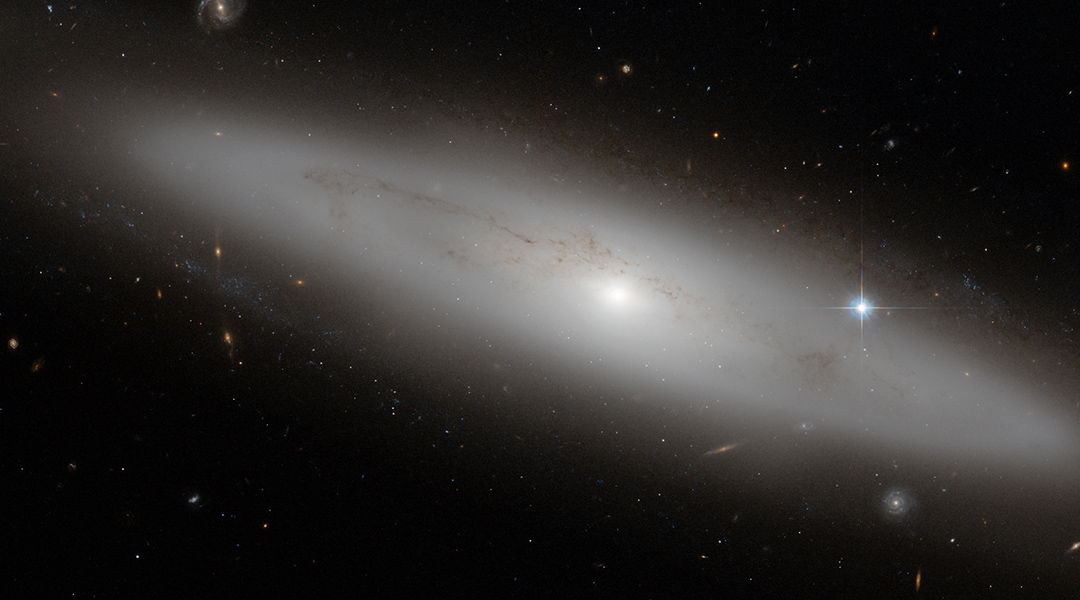 Scientists have recently made a curious observation about a ring of star-forming gas at the heart of the galaxy, NGC 3182. “We were very interested in NGC 3182 because it has a nuclear ring without any sign of a bar,” said Mina Pak, a post-doctoral researcher at the Korea Astronomy and Space Science Institute and lead author of the study soon to be published in The Astronomical Journal.

The bar Pak referred to is a central, bar-shaped structure made of stars, gas, and dust. They are found in roughly 65% of spiral galaxies and are important for forming the star-forming ring as they act almost like a funnel, pulling matter into the galaxy’s center.

But NGC 3182 is a lenticular galaxy — an elongated, lens-shaped galaxy without any visible bar. The presence of a ring of star-forming gases without a bar is puzzling as the bar is believed to be the most likely method for forming the ring.

“We wondered if there were alternatives that could have driven the formation of the nuclear ring. So, we listed every possible scenario and eliminated them one by one,” said Pak.

The ring orbits a supermassive black hole at the galaxy’s center, but to uncover the ring’s origins, Pak’s team needed detailed information about the gas’ motion throughout NGC 3182. This would allow them to track how it may have reached the galaxy’s center. They also looked for changes in the gas chemistry to identify what process drove this motion.

Using the 3.5m optical telescope housed at the Calo Alto Observatory in Spain, the authors measured spectra across NGC 3182. They used a technique called integral field spectroscopy, which involves splitting the galaxy into sub-sections and making hundreds of simultaneous measurements.

This approach created a high-resolution map describing the motion and composition of NGC 3182’s gas for Pak’s team to explore.

Could there still be a bar?

Pak and collaborators first had to be certain that a hidden bar did not exist. Whilst the images lacked this feature, it could be very weak or have already collapsed.

Bars are thought to form from other orbiting material becoming unstable and collecting near the center of the galaxy. So, even if very small, the astronomers would have expected the material that made up the bar to move together as a group.

By observing the motion of the galactic material, they hoped to spot the signs of this group moving around the galaxy’s center. Failing that, they might see signs of this bar breaking apart and falling into the center.

The results, however, showed that neither type of motion existed. Instead, they found an even density of stars, gas, and dust rotating around the galaxy’s center with no sign of a bar.

Was it a merger?

Another possibility to account for the unusual star-forming ring could be that NGC 3182 was merging with another galaxy. These interactions can range from head-on collisions to slight “touches”, but the former is unlikely as it would result in a churning in the gas that would have been spotted during their search for a bar.

The authors therefore turned their attention to searching for signs of the latter, as these minor mergers can cause a detectable exchange of gas found by measuring the gas’ metal content. When stars die, they expel heavy elements, such as metals, into their surroundings. By tracking a gas’ metal content, astronomers can tell whether stars have previously formed in that region.

If a merger occurred, it would inject gas that has not formed stars into NGC 3182’s ring and appear in measurements as gas with a low metal content. Whereas a high metal content would show the gas hosted previous generations of stars and so is unlikely to have come from a merger.

Pak’s team measured a high metal content in the star-forming ring, indicating that the gas likely originated from within NGC 3182.

Is a supermassive black hole responsible?

One final way this star-forming ring could have formed is due to radiation emitted from the supermassive black hole it rotates around.

This radiation could create shockwaves that compress the surrounding material into a ring that resembles a would-be bar-containing galaxy. The ring gas is then further squeezed into dense pockets where stars form. Simulations have predicted this phenomenon, but it has rarely been seen before.

Black holes are not the only source of this radiation. As the shockwave moves through the gas, the radiation will ionize or excite different elements, depending on the source. So, by comparing the ratios of these ionized gases, the authors could identify their origin.

Their measurements confirmed that the central black hole of NGC 3182 was emitting radiation, so it was the likely cause of this nuclear star-forming ring.

This rare observation represents an exciting confirmation of the theory that supermassive black holes can form nuclear star-forming rings and adds to our understanding of how galaxies evolve through time.

Pak says the team does not have any plans to study this object further, nor do they expect to future searches to uncover many of these rare finds. “However, we will always keep tabs on this kind of galaxy,” they said.