45 years worth of radio telescope observations have identified a pair of supermassive black holes at the core of two galaxies set to merge. 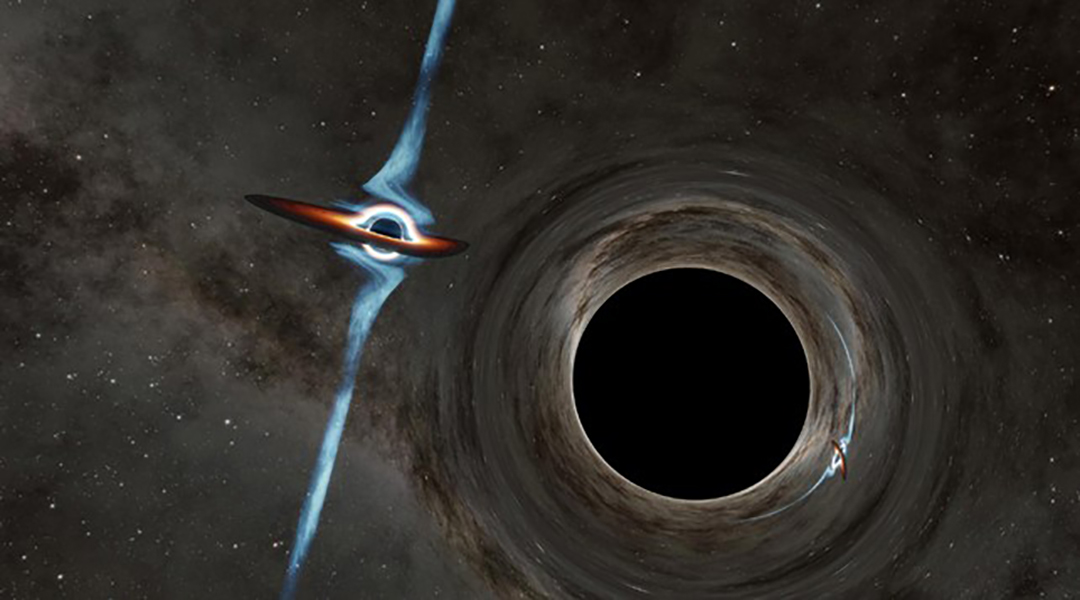 The merging of a pair of black holes is a common phenomenon. Since the first observation of such an event by the American gravitational wave observatory, LIGO, in 2016, physicists have discovered roughly 50 binary black hole mergers using LIGO and its European counterpart, Virgo.

In a binary system, black holes orbit one another, losing energy due to the emission of gravitational waves. Due to this energy loss, their orbits shrink, becoming a spiral, and eventually, the two black holes merge, creating a wild gravitational wave burst in the process. It is this burst that the gravitational observatories can “see” as the wave reaches Earth.

All coalescing black holes observed to date have originated from binary stars and are lighter than one hundred solar masses. However, if the black hole is hosted in the nucleus of a large galaxy, such as the Milky Way, its mass can be millions or even billions that of our Sun. Scientists expect that if two such galaxies with black holes at their centers merge, a supermassive black hole binary could form, which would create a tremendously powerful gravitational wave.

Mergers of heavy galaxies do not occur very often and as these processes are rather slow, astronomers have not yet observed the final stages of their supermassive black holes’ inspirals. That is, until now when an international team of physicists reported observations that indicate this type of merging event in a new paper published in The Astrophysical Journal Letters.

“This work shows the value of doing accurate monitoring of these sources over many years for performing discovery science,” said Roger Blandford, a Moore Distinguished Scholar in theoretical astrophysics at Caltech, in an interview.

The researchers analyzed radio observations of the quasar, PKS 2131-021, which lasted a total of 45 years, and found unanticipated periodic changes in its brightness.

Quasars are active cores of galaxies in which a supermassive black hole siphons matter from an encircling disk of gas, dust, and debris known as an accretion disk. The matter gets partially consumed by the black hole, but the rest becomes a jet that shoots out from the galaxy core at a velocity close to the speed of light.

If the jet points towards Earth, as is the case of PKS 2131-021, these systems are known as blazars, and radio waves emitted by the rapidly accelerated particles of the jet can be easily observed. The intensity of the radiation and its spectrum contain information about blazar dynamics.

Astronomers have discovered many blazars to date but have not observed oscillations in their brightness before. The team pointed out in their paper that there are several possible explanations for this observation, including precession of the relativistic jet due to misalignment of the black hole spin axis and accretion disk or to warping of the latter.

However, the best explanation the team can provide for the observed effect is that there is a second supermassive black hole in the vicinity of the first and the orbits of the two have led to oscillations in the speed of the jet with respect to Earth. The reason these oscillations in speed lead to oscillations in the radiation intensity is as a result of the Doppler effect, where the frequency of radiation for an observer changes as the source moves.

Since the explanation involving the supermassive black hole binary orbital motion is the simplest, the team applied Occam’s razor. The physicists analyzed a simplified theoretical model of a similar binary system and found that the behavior of the observable power spectrum is very similar to what they see with radio telescopes.

Analysis of the radiation showed that the blazar is located around 8.8 billion light years away from our Solar System and the black holes’ orbital period is approximately equal to two years. The scientists could not deduce the exact masses of the black holes, but they estimated it to be hundreds of millions of times larger than that of our Sun. The distance between the black holes is around 50 times greater than the diameter of Pluto’s orbit, which makes this binary system about ten times smaller than the only other known candidate for supermassive binary black hole called OJ 287.

With all this information, the scientists guess that the pair will merge in roughly 10,000 years.

If the physicists’ conclusion about oscillations is correct, the next maximum of the radio emission’s brightness will occur in February 2024, and the following minimum in July 2026. This means that it should be possible to confirm or disprove the supermassive black hole binary hypothesis within the next 5-10 years.

“This work is a testament to the importance of perseverance,” said Joseph Lazio of NASA’s Jet Propulsion Laboratory in Southern California, in an interview. “It took 45 years of radio observations to produce this result. Small teams, at different observatories across the country, took data week in and week out, month in and month out, to make this possible.”