To tailor the degradation of nanogels, Scientists from Utrecht University investigated the impact of the structure of polymeric building blocks on the properties of nanogels and their degradation behavior. 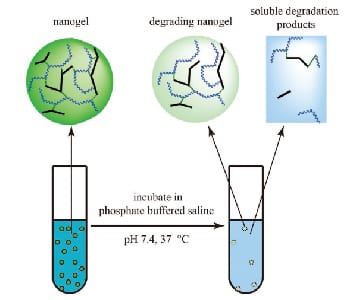 Nanogels are submicrometer-sized hydrogels composed of hydrophilic polymeric networks. Because of their good biocompatibility, nanogels are attractive systems for biomedical applications. While high stability of nanogels can be achieved by chemical crosslinking, degradability is required for efficient release of the cargo. This can be achieved by the introduction of biodegradable crosslinks in the nanogels, which can result in their disintegration under physiological conditions. If the building blocks of the nanogels are properly selected, the formed degradation products can be excreted by the kidneys to avoid side effects due to accumulation of the carrier.

To tailor the degradation of nanogels, Yinan Chen and co-workers from Utrecht University in The Netherlands investigated the impact of the structure of polymeric building blocks on the properties of the formed nanogels and on their degradation behavior. 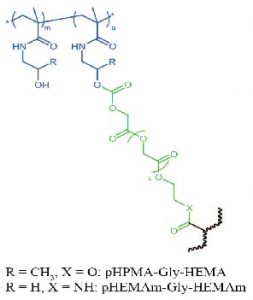 They synthesized two water-soluble polymers based on poly (N-(2-hydroxypropyl)methacrylamide) (pHPMAm) and poly (N-(2-hydroxyethyl)methacrylamide) (pHEMAm) and modified them with polymerizable functionalities that were connected to the polymer chains via hydrolytically cleavable glycolate esters bonds. The authors demonstrated that the obtained nanogels have tailorable degradation kinetics under physiological conditions, ranging from 24 hours to more than 4 days depending on their crosslinking density. It was furthermore shown that the release of a loaded macromolecular model drug can be controlled by tailoring the degradation kinetics of the nanogels. Finally, the nanogels showed excellent cytocompatibility and are therefore considered to be an attractive platform for drug delivery applications.