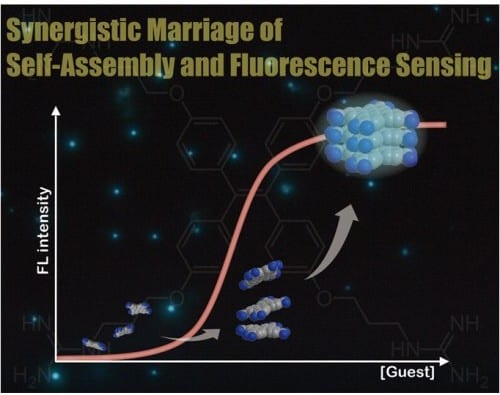 Challenges underlying the fluorescence sensing of biologically important molecules are the detection and differentiation of a target molecule from its structural analogues. As an example, pyridine nucleotide cofactors (NAD+, NADH, NADP+, and NADPH) can be raised. The NADPH produced in pentose phosphate pathway plays an essential role in balancing the redox state of living cells. To probe NADPH, one needs to differentiate it from the other three structural analogues.

Although precise differentiation of the cofactors based on their net-charges derived from the difference in the number of phosphate groups is inevitably required, it is difficult to discriminate a concerned target from its structural analogue by conventional fluorescence sensors because of their 1:1 binding mode between the receptor and the phosphates.

A rose garden on titanium surfaces
Epidermal Electronics - A Step Closer to Wearable Diagnostic "Labs"
Expanding the Capabilities of IR Spectroscopy
Bending the world's strongest material ... on the nanoscale