Detection of nanoparticles and DNA biomarkers at clinically relevant low levels can be achieved by combining epifluorescent microscopy with dielectrophoretic microarrays.

Detection of nanoparticles and DNA biomarkers at clinically relevant low levels can be achieved by combining epifluorescent microscopy with dielectrophoretic microarrays. 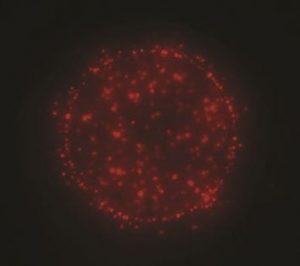 The ability to detect and identify low levels of analytes is of growing importance in medicine and nanotechnology; for example, in diagnostic monitoring of drug delivery nanoparticle levels, identification of cell-free circulating DNA/RNA and other nanoparticulate biomarkers, or detection of pathogens in clinical and environmental samples. Common wide-field epifluorescent microscopes generally lack the resolution and sensitivity to detect low levels of nanoparticulates in biological and clinical samples such as blood and plasma. On the other hand, advanced systems such as confocal microscopes may improve detection. However, every ignoring some technical limitations, they are neither low-cost nor easy to use, which is essential for point-of-care devices.

The low cost and widespread penetration of epifluorescent microscopes into laboratory settings, however, makes them a strong candidate for inclusion in a clinical system designed for low level detection. To put this idea into practice, researchers from the University of California, San Diego followed a new path: instead of changing the optical system to better detect an existing sample, they modified the sample’s appearance to better suit the system by pairing an epifluorescent microscope with a microelectrode array capable of dielectrophoretic (DEP) processes.

Unlike DC electrophoresis, which is limited to the separation of charged particles, DEP is able to separate, concentrate, and trap particles by a variety of properties including size, conductivity, density, permittivity, and charge. Force generated through DEP is dependent upon an induced rather than an intrinsic dipole, so it does not require a particle having a net (nonzero) charge. DEP provides selective concentration and separation of a wide range of particles by frequency modulation.

The combined microscope and DEP microelectrode array system showed to be capable of detecting labeled nanoparticulates at concentrations 50 to 100 times lower than clinically significant levels indicative of pathologic processes. Nanoparticles and DNA biomarkers were rapidly isolated and concentrated onto specific microscopic locations where they could be easily detected by epifluorescent microscopy. In their study, the researchers were able to detect 40 nm nanoparticles down to 2–3 X 103/µl levels and DNA down to the 200 pg/ml level.

The Californian team is convinced that the synergy of epifluorescent microscopy and DEP microarray devices provides a new paradigm for DNA biomarker diagnostics and the monitoring of drug delivery nanoparticle concentrations.