Ting Zhang and co-workers from the Suzhou Institute of Nano-Tech and Nano-Bionics at the Chinese Academy of Sciences develop a novel superhydrophobic and piezoresistive coating for wearable sensing devices. The coating is durable in harsh conditions and can be used to detect real-time human movement when fabricated as a wearable strain sensor. 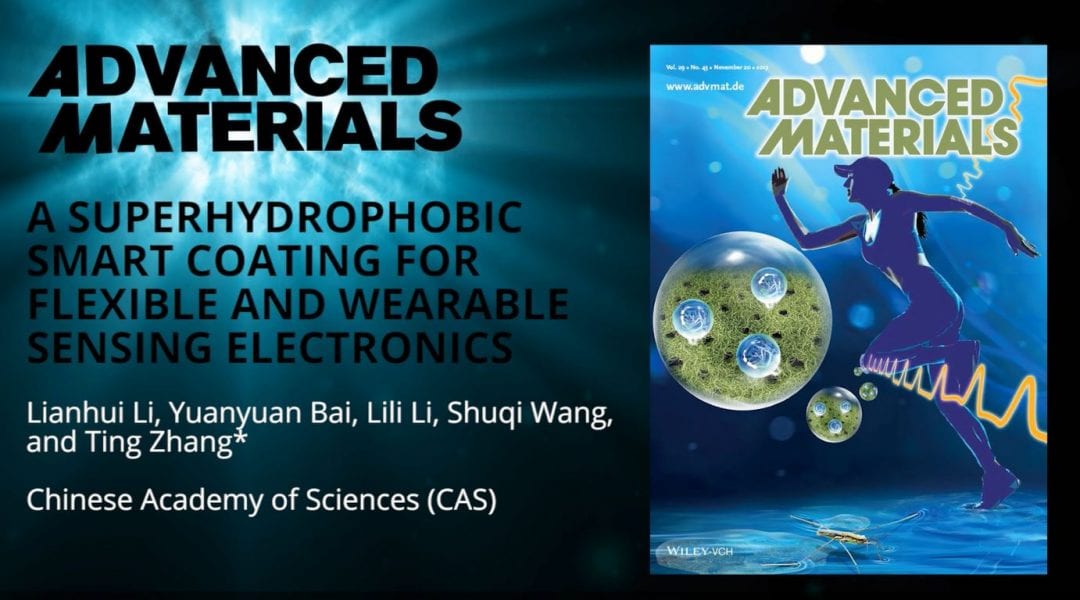 Exposure to water droplets does not always make a surface wet. Some surfaces in nature, such as the leaves of the lotus flower, have an extreme ability to repel water and are known as superhydrophobic. We also rely on waterproof artificial materials to keep our clothing dry in the outdoors and to protect electronics from being damaged. As wearable electronics become increasingly popular, multifunctional coatings to that do more than just repel water are being sought after.

In a recent publication in Advanced Materials, Ting Zhang and co-workers from the Suzhou Institute of Nano-Tech and Nano-Bionics at the Chinese Academy of Sciences develop a novel superhydrophobic and piezoresistive coating for wearable sensing devices.

To produce the coating, multiwalled carbon nanotubes (MWCNTs), which have high intrinsic electrical conductivity, are first dispersed in cyclohexane by sonication. A thermoplastic elastomer (TPE) is then added, forming a highly stable suspension. This suspension is spray-coated onto a substrate at a controlled speed and pressure. Washing the film with ethanol for two minutes, followed by drying, yields a superhydrophobic film, determined by its water contact angle of 162°. Water droplets immediately roll off the film, which can be attributed to multiple pit-like micro-/nanostructured features on the surface of the film.

When a piece of cloth is soaked in the MWCNT/TPE coating and kneaded 300 times, it maintains its water-repellency, demonstrating strong adhesion of the coating with the substrate.  The same result is observed when the coating is applied as a waterproofing agent for a fabric glove: the glove remains completely dry.

A magnet-driven, strider-like copper robot was also fabricated by coating magnetite incorporated MWCNT/TPE film onto the “feet”. The robot could easily glide on the surface of water when driven by a magnet due to air bubbles trapped between the robot and the surface of the water, reducing the frictional drag and enhancing the buoyancy of the robot on the water.

To demonstrate the durability of the coating, the authors exposed coated glass substrates to UV light for 48 hours. In a separate experiment, they immersed coated substrates in 1 M hydrochloric acid or sodium hydroxide for 12 hours. Under each harsh condition, the substrate maintains its superhydrophobicity, as indicated by water contact angles over 150°.

When combined with a flexible silicone substrate that could be stretched, bent, and twisted, the MWCNT/TPE film could function as a wearable strain sensor that detects changes in resistance in real-time with a response time of only 8 ms—this is significantly faster than other reported strain sensors. To detect real-time human movement, the authors fabricated a smart glove coated with the MWCNT/TPE film. Repeatedly bending the index finger produces a clear rise and fall of the relative resistance with each cycle of bending. Even when water is periodically dropped onto the glove, the performance is not affected, indicating its ability to be used in wet conditions.

To find out more about this superhydrophobic smart coating, please visit the Advanced Materials homepage.