An EPFL team has built a prototype for an image sensor based on the semi-conducting properties of molybdenite. 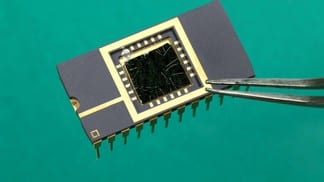 A new material has the potential to improve the sensitivity of photographic image sensors by a factor of five. In 2011, an EPFL team led by Andras Kis discovered the amazing semi-conducting properties of molybdenite (MoS2), and they have been exploring its potential in various technological applications ever since. This promising candidate for replacing silicon has now been integrated in a prototype of an image sensor. This sensor, described in an article appearing in Nature Nanotechnology, has five times the light sensitivity of current technology.

All digital cameras work according to the same principle: they convert light into an electric charge. The camera has a light sensor, whose surface is a semi-conducting material that is divided into millions of cells, or pixels. The semi-conducting material on each cell reacts to the incoming light by generating a specific electrical charge, which is then transferred to the camera’s firmware for processing. The efficiency of this process depends on the quantity of light that is needed to trigger the charge transfer.

The objective of the EPFL researchers was to demonstrate molybdenite’s potential in image sensors. For this reason, their sensor only has a single pixel. But it needs five times less light to trigger a charge transfer than the silicon-based sensors that are currently available. “Our main goal is to prove that MoS2 is an ideal candidate for this kind of application,” explains Kis.

This level of sensitivity would open up the huge area of low-light or night photography, without resorting to “noise”-generating amplification techniques, slowing down the shutter speed or using a flash. For some specialized domains in which light conditions are often not optimal, such as astrophotography or biological imaging, the advantage is even more obvious. “It would make it possible to take photographs using only starlight,” says Kis.

Molybdenite’s extraordinary properties make this performance possible. Like the silicon used in currently available sensors, molybdenite requires an electric current, which comes from the battery. To generate a pixel, the charge generated by the light energy must be greater than the threshold current from the battery.

A single-atom layer of molybdenite requires only a very small electric charge to function. Because of this, it takes much less light energy to reach the threshold needed to generate a pixel.

MoS2 is a naturally abundant, inexpensive material. In addition, Kis explains, the prototype doesn’t require any other semi-conductors, which should greatly simplify manufacturing processes. Kis, who is a pioneer in research on the semi-conductivity of molybdenite, recently demonstrated its potential in an integrated circuit and, in early 2013, a flash memory prototoype. With this new step into imaging, molybdenite shows its extraordinary potential in another important area of application.